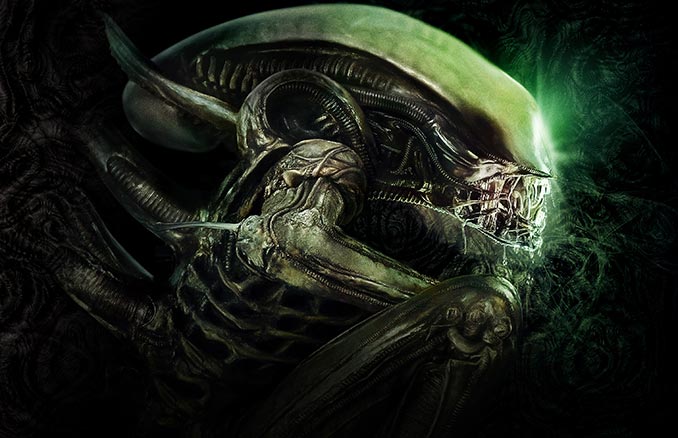 The movie may be from 1979, but as you can see in this brand new Alien “In Space No One Can Hear You Scream” Trailer, it still looks really cool. It would be awesome if this was a trailer for a new movie, but apparently 20th Century FOX released this just to promote the existing Alien Movies on Blu-ray and DVD. It’s still fascinating to see a modern style trailer for a sci-fi movie that is almost 40 years old.

There is also a brand new Aliens Trailer for the sequel.

The time is the future. The crew aboard a massive commercial space vehicle is enroute to earth with a load of extraterrestrial ore when they are sidetracked by mysterious signals from a nearby planet. The signals seem to be calls for help and when the space ship arrives they find a ruined, moldering spacecraft and within it egg-like living organisms.

Today 20th Century FOX released a New Alien Movie Trailer, as well as this new Aliens “It’s War” Trailer for the sequel. There doesn’t seem to be anything new, such as a 4K release, behind these new trailers. Apparently they’re just for fun, and to […]

Alarm clocks are necessary, but very much annoying. How many times have you been in a deep sleep, dreaming about something you probably want to keep to yourself, when BAM, the alarm starts blaring and la la land is gone. Time to wake up and […]

Are you a super-fan of the movie, Alien? Do you live in the UK? Do you have room in your home for the massive Alien Space Jockey Model? If you don’t have the room, are you willing to live in your yard to make room […]

The invasion is going to be comfy when this Space Invaders Alien Crab 3D Cushion lands on your couch. This cushion in shaped like one of the aliens from Space Invaders. Put a little 8-Bit on your couch and have some 8-Bit pillow fights. He […]

While the coolest rubber ducks are probably the Star Wars, Doctor Who, and Zombies, these Astronaut and Space Alien Rubber Duckies are still pretty sweet. They are very inexpensive, so for just a small amount of money you can get 12 of these astronaut rubber […]