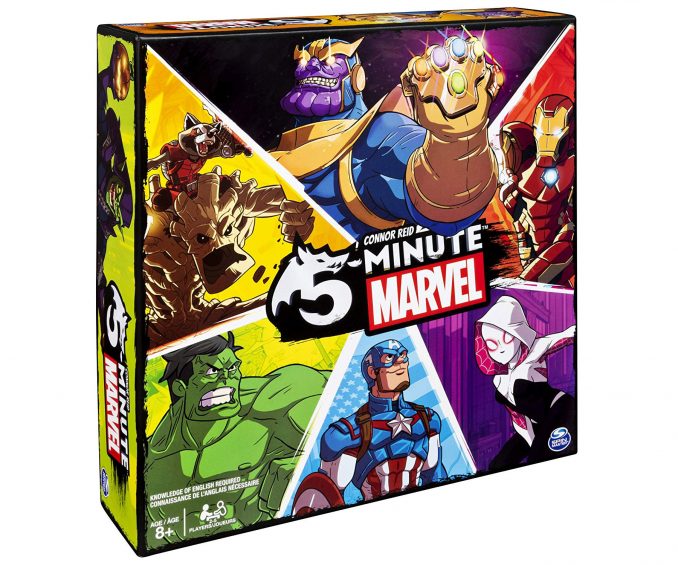 Get your game night off to a fun and exciting start with the 5-Minute Marvel Fast-Paced Cooperative Card Game. You work together with your friends to defeat evil Villains, Goons, and Minions in a frantic battle that lasts just 5 minutes. After it’s over, just choose another hero and play again.

Each player gets to be one of 10 Marvel superheroes: Captain America, Spider-Man, Iron Man, Black Widow, Hulk, Rocket and Groot, Spider-Gwen, Ms. Marvel, Medusa, or Squirrel Girl. Work together to beat villains one by one until you face the ultimate battle—defeating the mighty Thanos!

The fast-paced, cooperative card game, 5-Minute Marvel, is the perfect kick-off to game night. Choose a Marvel hero and team up with other players to defeat evil Villains, Minions and Goons in just five minutes. It’s easy to learn, quick to play and gets everyone’s adrenaline going during the epic adventure that’s just five minutes.

This frantic and chaotic card game keeps everyone on edge as players must defeat an endless horde of enemies before time’s up. Everyone plays at the same time altogether. Slap down cards to match symbols on the Villain cards to destroy them, then swipe the cards to the side. Battle the next villain and the next to get to the ultimate battle against the all-powerful Thanos.

Arm yourself with the special weapons and abilities of one of ten Marvel heroes including Iron Man, Captain America, Black Widow and Spider-Man. You can switch heroes between rounds of the game to wallop the bad guys with different superpowers each time.

The 5-Minute Marvel Game encourages teamwork as everyone plays together to win together—or epically fail together. Communication and cooperation are keys to the game. As you frantically put down cards to take out villains, be careful not to duplicate efforts and waste cards. There are only so many cards to play to win.

Combine your Resource Cards and Action Cards with other players to knock out the relentless swarm of creepy sidekicks and angry dudes. Choose your cards wisely because once you put a card down you can’t pick it up. With strategic thinking and a little luck, celebrate a team victory after crushing the Mad Titan Thanos.

5-Minute Marvel can be purchased at BoxLunch, Amazon, and Walmart.