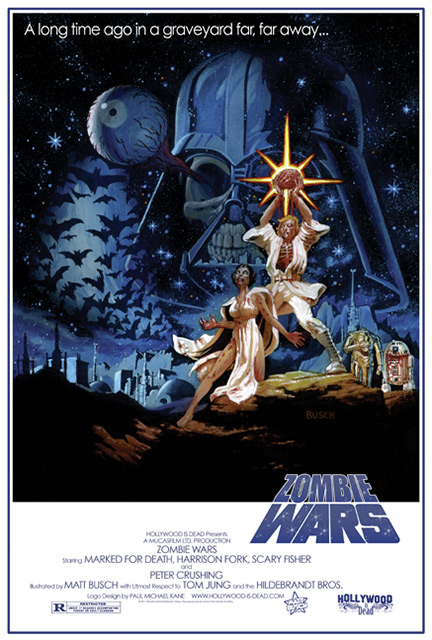 These Zombie Star Wars Movie Posters are not new. Actually they are from a few years ago (before I wrote for GeekAlerts), but they are way too cool not to mention as they combine two of our favorite things: Zombies and Star Wars. They were created by famed illustrator Matt Busch, who has been creating art for Star Wars books and other products since 1994. Part of an exclusive signed edition, these posters are printed on heavy-weight 100 lb card stock.

There is the Zombie Wars poster shown on top of this page as well as a zombie spoof one for each of the 6 Star Wars movies:

These Zombie Wars Posters by Matt Busch are available for $19.95 each at Neatoshop. In addition to Zombie Star Wars movie posters, there are zombified versions of many other movie posters including Lord of the Rings, Star Trek, Indiana Jones, E.T. The Extra Terrestrial, Jaws, Avatar, Back to the Future, The Goonies, Fight Club, Toy Story, Ghostbusters, and many more.

Go back to where it all began…For all you Star Wars aficionados, the Classic Star Wars Movie Posters are going to be a must have addition for your collection.  These reprints of the George Lucas Star Wars film capture all the great imagery of the […]

These Star Trek Retro Episode Posters are amazing. If you love the style and flavor of the original series, you will love these posters. They take the poster styles of the era and apply them to various episodes of the hit TV show. Each set […]