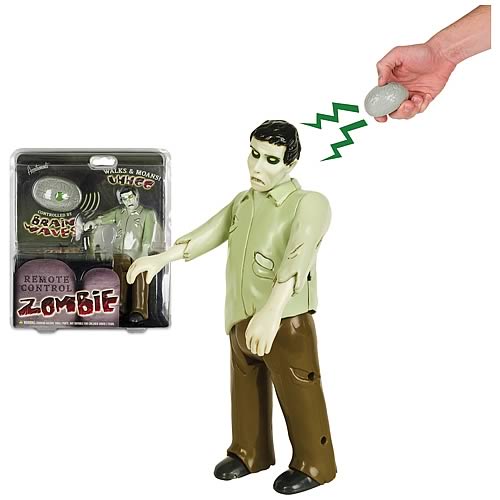 When Plants vs. Zombies (and it’s not so distant specie relative, the vampires from Twilight) reached the peak of its popularity, so did zombies (and vampires) in the media. Shows and clips featuring zombies and vampires had an increased appearance, with more vampire books being released with every passing month. The Zombie Remote Control Figure might be a little late arriving to the scene, but it sure it something different than all the other RC toys out there on the market.

If you’re stumped on what to get your little Junior or nephew for his birthday, then this might be a good gift to get, especially if he’s already got a ton of remote control cars and racers. Also, here’s another reason why parents would prefer these walking zombies versus speeding cars: they have more time to notice a slowly hobbling toy and steer clear of its path rather than a fast-moving race car.

Run! Hide! Barricade yourself in the basement of an abandoned farmhouse! No, wait. You’re in control of this soulless body, and you decide who or what he’s after! This remarkable Remote Control Zombie stands 7 3/4-inches tall and is made of plastic. He will trudge forward and groan when you activate him by pressing the button on the 2 3/4-inch long, brain-shaped remote. All this… and brains, too! Horrifyingly entertaining, he’s articulated at the neck, shoulders, and hips. Quick! Take control of this zombie… before it’s too late!

The Zombie Remote Control Figure is available from Entertainment Earth for $24.99.

So Now You’re a Zombie Book

Be honest, how many of you are getting ready for total chaos come December 2012? Well if you are, you probably have also thought about the increasing likely odds that you or someone you know will become a zombie. If this sounds like you, then […]