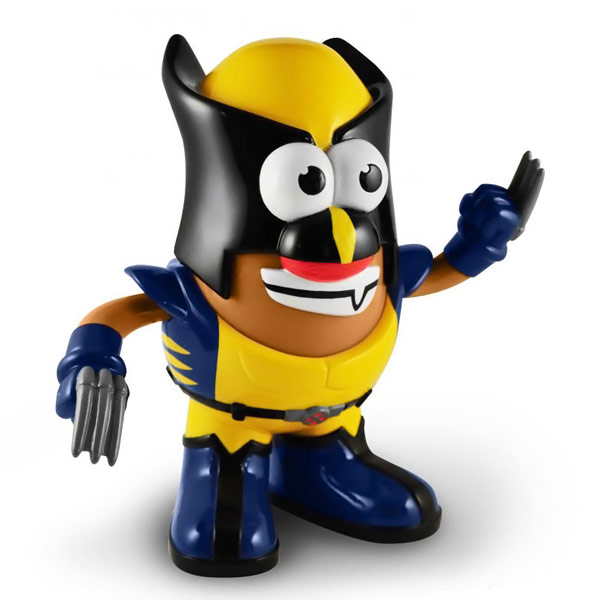 One of the most popular members of the X-Men has gone from menacing to cute with the Wolverine Marvel Comics Mr. Potato Head, making inquiring minds wonder if the sharp-clawed mutant will now call people ‘Spud’ instead of ‘Bub.’

Wolvie needs to be extra careful in his new form or he might accidentally turn himself into french fries with those adamantium claws, and I’m not sure his healing factor is up to the challenge of fixing that.

As if a potato version of Wolverine wasn’t comical enough, you can also mix-and-match with other Mr. Potato Head figures to create some truly unique characters.

The Wolverine Marvel Comics Mr. Potato Head will be available July 2013, but can be pre-ordered now for $17.99 at Entertainment Earth.

Ant meet potato. Potato meet ant. This Marvel Ant-Man Mr Potato Head is perfect for fans of spuds and ant sized heroes. Scott Lang has been has been given the Mr Potato Head treatment, so now you can mix and match Ant-Man’s parts with other […]

Get your Nyuk-Nyuk-Nyuk on with the Three Stooges Mr. Potato Head Boxed Set as the new movie introduces a brand new generation to the slapstick antics of Moe, Larry, and Curly. The Stooges sometimes don’t seem much smarter than a pile of potatoes so a […]

Mr. Potato Head is a classic toy. You can mix and match his features anyway you like, but he’s still just a spud. However, this Batman Classic Mr. Potato Head takes things to the next level. Gotham city has a new protector and he’s wearing […]

Fans of Gene Simmons and KISS are going to love this wacky set of spuds. The KISS Mr. Potato Head Collector’s Set has all of the band members in Mr. Potato Head form. You get the Demon, Starchild (Or in this case starch-child?), Spaceman, and Catman. Of […]

A long time ago, in a galaxy far, far away, the Star Wars Han Solo and Chewbacca Poptaters Mr Potato Head Figures gave a lift to a couple of spuds on a desert planet. Han and Chewie didn’t know it at the time, but they […]