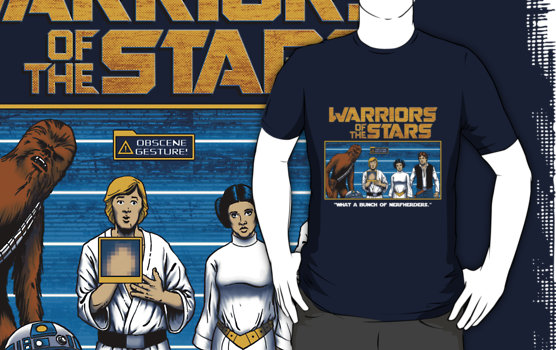 The Warriors of the Stars T-Shirt features a group of rebels who were guarding the galaxy long before Peter Quill and his gang were doing the job.

Star Wars meets Guardians of the Galaxy as artist Tony Nichols inserts Luke Skywalker, Princess Leia, Han Solo, Chewbacca, and R2-D2 in the hilarious prison line-up scene from Guardians of the Galaxy. It’s a great concept but the idea of Luke being Star-Lord doesn’t seem like a natural fit. Wouldn’t you expect Solo (scruffy nerf-herder that he is) to be the one to flip the obscene gesture? And poor C-3PO didn’t even get included. Of course, the protocol droid was probably able to talk himself into an official interpreter position and is now part of the prison’s employment roster… and hopefully doing his best to help his friends plan an escape. 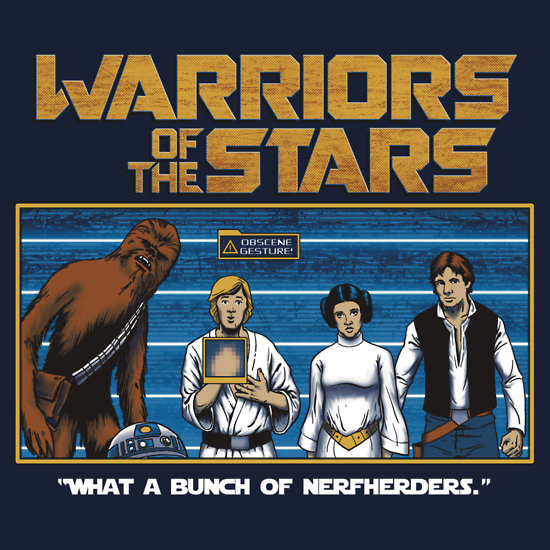 The Warriors of the Stars T-Shirt is available for $24.80 at Redbubble.com.

Most people throw away old car and bicycle parts but creative individuals with a lot of time on their hands take all that junk and create things like the Metal Art Warriors, which share a striking resemblance to creatures seen on the big screen. These […]

The Bravest Warriors Co-operative Dice Game lets players work together to overcome obstacles and win the game. You can play as Beth, Catbug, Chris, Danny, Impossibear, or Wallow. This will be a fun game for the whole family with many twists and turns along the […]

The first handheld video gaming console I ever owned was a Nintendo Game Boy. It was also the last one that my mother proclaimed that she would ever get for me, because it was full of scratches and chips a mere few weeks after I […]

This Futurama Bender Shogun Warriors 24-Inch Vinyl Figure is all kinds of awesome. It has spring-loaded arms for fist-firing action and it stands 2-feet tall. If that isn’t crazy enough, it is also a limited edition of just 500 pieces. That means, if you want […]