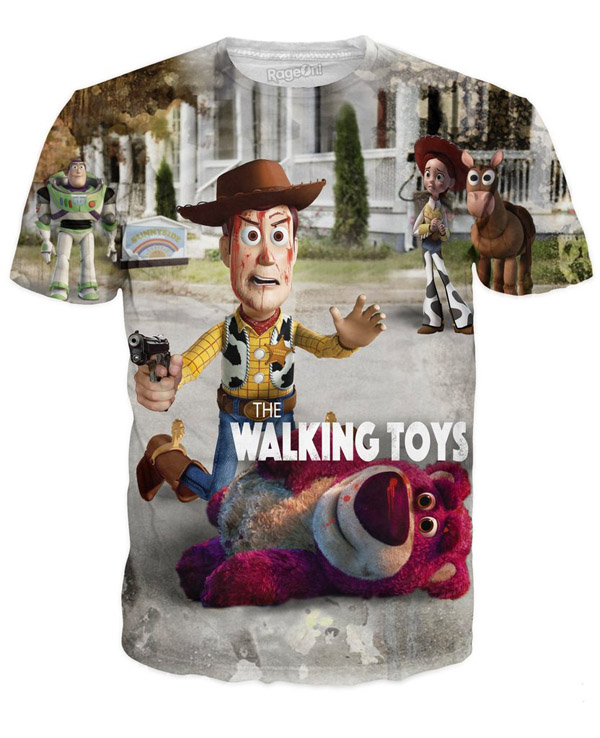 Once again, The Walking Dead merges with Toy Story on the Walking Toys Season 5 T-Shirt to reveal a dark world where dead toys don’t stay dead.

Remember the Walking Toys T-Shirt? Well, this is a like a sequel to that, giving a Toy Story twist to Rick Grimes’ epic meltdown on the streets of Alexandria. This time, we have Sheriff Woody laying down the law as he kneels over the fallen Lots-o’-Huggin’ Bear, gun drawn and blood on his face. This isn’t a democracy anymore. It’s a Woodtatorship.

The Walking Toys Season 5 T-Shirt is available starting from $24.99 at RageOn.com.

Kiss democracy goodbye with the Walking Dead Ricktatorship T-Shirt, because strong leadership is needed when the zombie apocalypse happens. Too many leaders slow down the decision-making process and there’s no time to convene a meeting when a hungry corpse is trying to take a bite […]

Are you a fan of AMC’s hit TV series The Walking Dead? If so, The Walking Dead Plush Toys might be the perfect desktop distraction for those long work weeks. Waiting for Sunday night never felt so long 🙂 The set includes six plush figures, […]

You’ve read the comic books and watched the hit TV show. Now you can collect these Walking Dead Plush Toys. They make all of the characters super cute. Get a plush version of your favorite Walking Dead character or get the whole set. These make […]