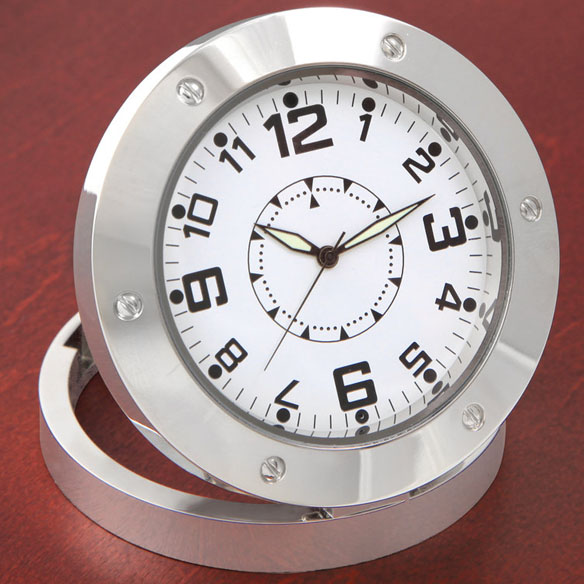 For fans of spy gear stuff or anyone that has fancy office memorabilia and items, you will like this Video Surveillance Clock. This classic white faced analog clock is perfect for keeping an eye on all your expensive collectibles. Just place it on your desk in in a spot that has a clear view of the images you want to watch over and let it do the rest. With its image sensor, you can capture 720 x 480 resolution video and take 1,280 x 960 resolution photos while listening in with the sensitive microphone.

The hidden camera is discreetly placed in the analog clock face and you won’t be able to tell it is there. The Video Surveillance Clock makes a great gift for dad and will look good in a variety of settings.

This is the analog clock with a built-in, motion-activated video surveillance camera that records audio and video, ideal for inconspicuously monitoring a room or office. The video camera’s image sensor captures 720 x 480 resolution video in a 62º angle from nine feet away while its sensitive microphone picks up sound from 16′ away. It can also take photographs at 1,280 x 960 resolution. An included 4 GB microSD card stores up to six hours of AVI video or 52,000 JPG images; supports up to 8 GB microSD cards. Content is downloaded to a computer and its rechargeable lithium battery is recharged via a USB 2.0 port and included cable. Provides up to 1 1/2 hours of video recording (18 months of stand-by time) from a three-hour charge. Works with Windows 7, Vista, and XP, and Mac. 2 3/4″ Diam. x 3/4″ D. (3 oz.)

You can purchase the Video Surveillance Clock at Hammacher Schlemmer for $159.95.

This simple, but quite nice looking analogue watch, hides a little secret – or many secrets, depending on what you decide to carry around on your wrist using the built-in microSD card reader functionality.

Per Emanuelsson and Bastian Bischoff, two designers from the HDK school of design and crafts in Gothenburg, Sweden, has designed this cool looking surveillance inspired light source.

Surveillance cameras make you feel a little safer but they’re not very exciting because they just sit there. However, the Ulo Owl Surveillance Camera adds a little life and fun to keeping things secure with a little owl that displays emotion. Safety gets cute with […]

There are a lot of sleek, futuristic clocks out there but the Analog Voltmeter Clock goes in the opposite direction, telling time with some cool retro, analog style. Designed to look like an analog voltmeter, this electrifying design is perfect for geeks who are into […]

Maybe you remember the wireless baby monitor we covered some week ago. Here’s an even more sophisticated system where you also have the option to pan and tilt the wireless camera.

The Magic Sensor Clock ($11) features a built-in multicolored light and a display that shows information about time, date, week and temperature.