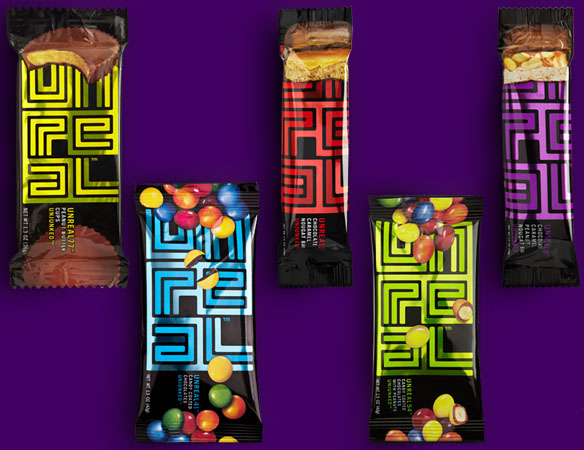 Most of us love the taste of junk food, especially candy that you can get just about anywhere at any time. It’s relatively inexpensive and hits the spot. But what many candy companies have done is cut corners by lacing candy with all sorts of cheaper artificial ingredients that are much worse for us than plain sugar and pure fat, and this stuff is probably what’s turning people so fat and sick. UNREAL Candy is a new brand of candy that strives to satisfy the sweet tooth but without all the chemicals that do a body bad.

UNREAL uses cane sugar which is better than refined sugar and definitely better than corn syrup. So when you decide to give in to your junk food cravings, you can feel a little better knowing that you’re not feeding your body total rubbage. In the meantime, taste is not sacrificed and neither is color. An UNREAL candy bar might even taste better than your old reliable candy. UNREAL has worked hard to keep the integrity of the candies we love when it comes to taste and looks, and has replaced the ingredients with healthier ingredients.

Here’s some Nutrition Facts for the UNREAL #54 candy pack, which would rival Peanut M&Ms: 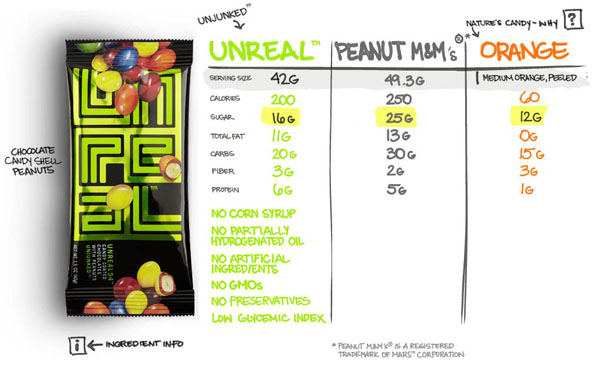 Not only are the bad things weeded out, beneficial things are put into the candy. There is more fiber and protein and less carbs and fat compared to the candy it’s trying to outshine.

Are you going to still get fat if you eat too many candy bars? Sure. But your DNA won’t mutate as quickly.

UNREAL Candy is already available at stores such as Walgreens, Ralphs, CVS and Staples, and it’s heading to many more popular stores like Target in the near future. You’ll be able to recognize UNREAL from its hip and colorful packaging.

With the release of Activision’s all-new Skylanders Giants video game, there are a ton of reasons to get pumped for the game’s arrival. Just when you’ve gone bankrupt trying to accumulate all the possible characters from Spyro’s Adventures, now you have to buy the new […]

Christmas is a time to gather with family and friends, exchange gifts, enjoy food, and maybe even sing a few Christmas carols. While not everyone is into the singing, you can still do your part by providing the Sugar Plums Christmas Candy when the time […]

If you are like most of us, you probably have a bunch of fond memories from the days when you were a kid.  A lot of mine usually revolve around days spent at carnivals or amusement parks.  The rides, roller coasters and games were all […]

Does your job make you feel like you are cleaning up Jawa junk all day? Like droid parts and such? Well, if you can identify with Jawa junk removal, check out this Star Wars Jawa Junk Removal Work Shirt. This 65% polyester 35% cotton Star […]