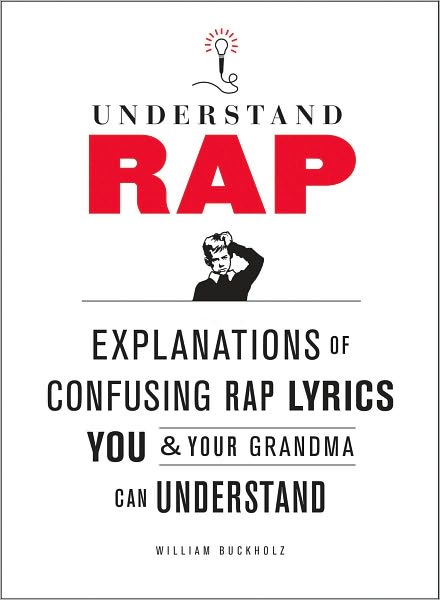 The only way to appreciate rap music is to understand it. But linear thinkers have a hard time decoding rap because rap lyrics don’t translate word-for-word, nor do they mean what you think they say. To the rescue comes William Buckholz’s book, Understand Rap: Explanations of Confusing Rap Lyrics Even You and Your Grandma Understand.

Rap songs are famous for their double entendres, clever turns of phrase, and general ingenuity, but that doesn’t mean things always make sense the first time around. Enter Understand Rap, a very funny pop-cultural reference book based on the website of the same name, which precisely explains the confusing lyrics and terms used in rap songs using language that even the most un-hip person can understand. The juxtaposition of a dry, academic tone with hip-hop terminology results in a book that’s as entertaining as it is informative. 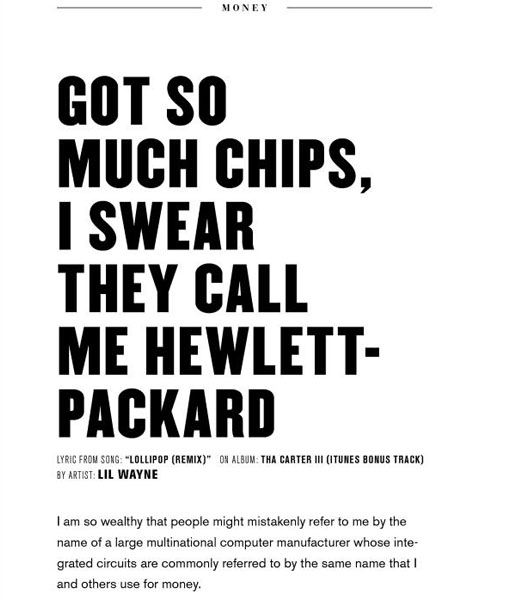 Where has this book been all our lives? Now we can crack the surface of a mystery that’s been haunting us for years; what rap songs are really trying to tell us. It’s time to open up our hearts to rap and learn from its wise messages that are so candidly spelled out for us in Nerdonese-English. Find out what T.I. meant by saying “rubber band banks” and what kind of “chips” Lil Wayne has. I can tell you this much, it’s not the barbecue kind.

Geeks can definitely empathize with famous gangsta rappers because both parties are commonly misunderstood by the general public. All it takes for two worlds to come together is an interpreter; one who’s book smart and street smart.

At your next get-together, make sure you have this book out on the coffee table or in the bathroom. It’ll entertain, educate and enlighten. Understand Rap by William Buckholz is available through Urban Outfitters for $12.95 and on Amazon, starting at $7.77 new.

Are you the sort of wordsmith who uses a dictionary often? If so, you may want to give this Two Way English Chinese Talking Electronic Dictionary a try. Words make the world go around after all. Maybe you need a quick translation, or a quick […]

Whenever I’d play my music out loud, my mom or dad would pipe up, “This is what you call music these days? It sounds like rubbish!” (Okay, so they don’t really use the word “rubbish,” but a synonym that’s a bit more unpleasant.) I have […]

Haven’t you heard the latest? Handwritten notes are out, and so are text messages and IMs. The coolest way to communicate, whether you’re at home or in the office, is through coffee mug–via the Mixed Messages Mug. Of course, they only work best if the […]