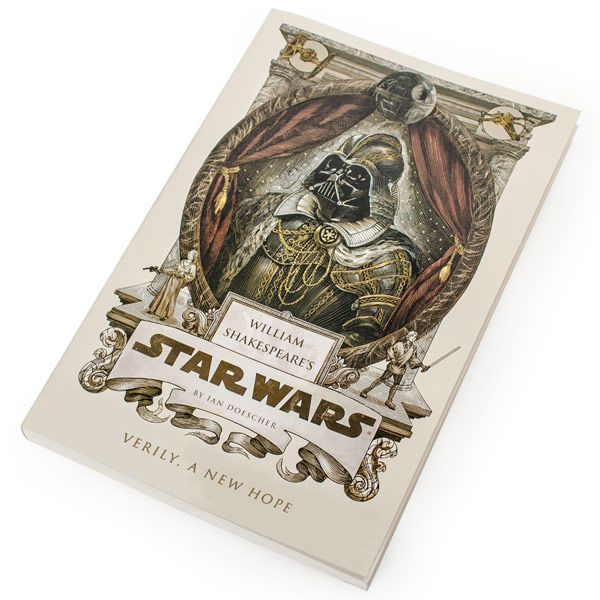 If the Bard had looked to the stars, he might have written about a young farm boy whose future had marked him to do great things as a valiant knight, but since he didn’t, it’s a good thing we have William Shakespeare’s Star Wars to tell the story.

Star Wars: Verily, A New Hope brings us the adventure of Luke Skywalker, Princess Leia, and Han Solo in a way that you’ve never experienced before – in iambic pentameter, accompanied by twenty gorgeous Elizabethan illustrations. 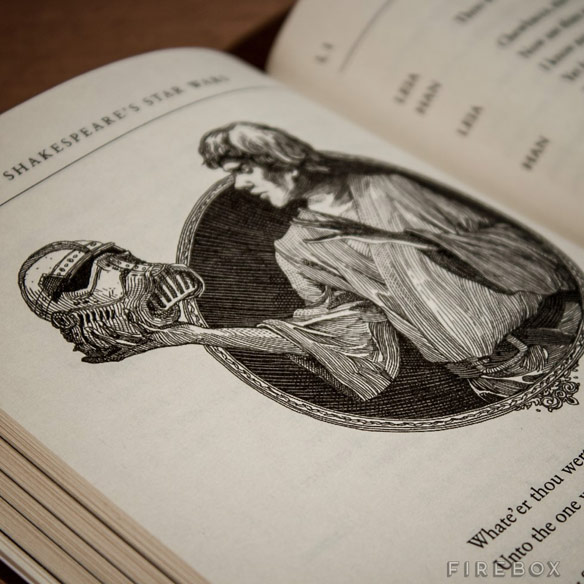 With Shakespeare’s hand acting as a guiding force, the adventure that began a long time ago in a galaxy far, far away begins in a way that’s both familiar and new.

It is a period of civil war.
The spaceships of the rebels, striking swift
From base unseen, have gain’d a vict’ry o’er
The cruel Galactic Empire, now adrift.
Amidst the battle, rebel spies prevail’d 5
And stole the plans to a space station vast,
Whose pow’rful beams will later be unveil’d
And crush a planet: ’tis the DEATH STAR blast.
Pursu’d by agents sinister and cold,
Now Princess Leia to her home doth flee, 10
Deliv’ring plans and a new hope they hold:
Of bringing freedom to the galaxy.
In time so long ago begins our play,
In star-crossed galaxy far, far away. 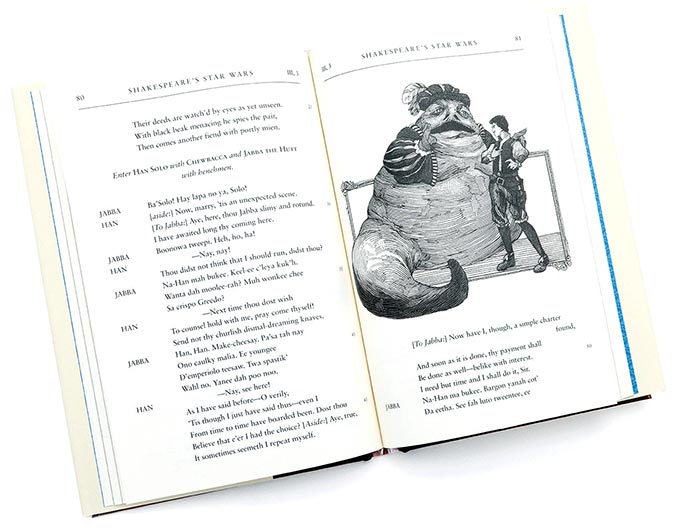 Return once more to a galaxy far, far away with this sublime retelling of George Lucas’s epic Star Wars in the style of the immortal Bard of Avon. The saga of a wise (Jedi) knight and an evil (Sith) lord, of a beautiful princess held captive and a young hero coming of age, Star Wars abounds with all the valor and villainy of Shakespeare’s greatest plays. ’Tis a tale told by fretful droids, full of faithful Wookiees and fearsome Stormtroopers, signifying…pretty much everything.

Read the classic tale written in a classic style with William Shakespeare’s Star Wars from BoxLunch, Firebox.com, and £9.99 Amazon.co.uk.