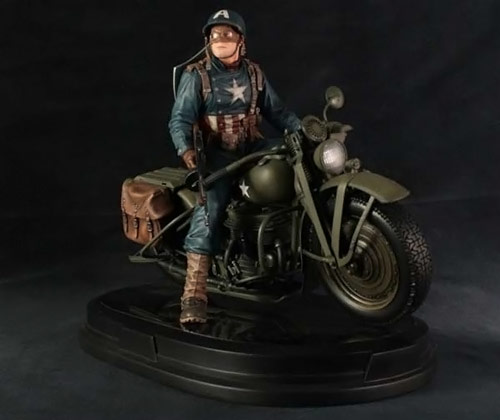 Think this is a statue of Cap from Captain America: The First Avenger? Think again because the Ultimates Captain America on Motorcycle Statue gives us a look at a shield-slinger that’s similar to the one we know, while being different at the same time.

Because Marvel wasn’t making enough money with their regular superhero comic books, they created the Ultimates Universe, a parallel world similar to our own, but with a few distinct changes. In the world of the Ultimates, the super in super soldier is heavily emphasized, with Steve Rogers gaining super strength, super speed, super agility, and a Wolverine-like healing factor when he’s transformed into Captain America.

Also, as you can see on the statue, Cap’s World War II-era was a little different, with his ‘mask’ consisting of a combat helmet and something that resembles an old-fashioned leather airman’s cap with goggles attached.

The Ultimates Captain America on Motorcycle Statue is available for $458.99 at Entertainment Earth.