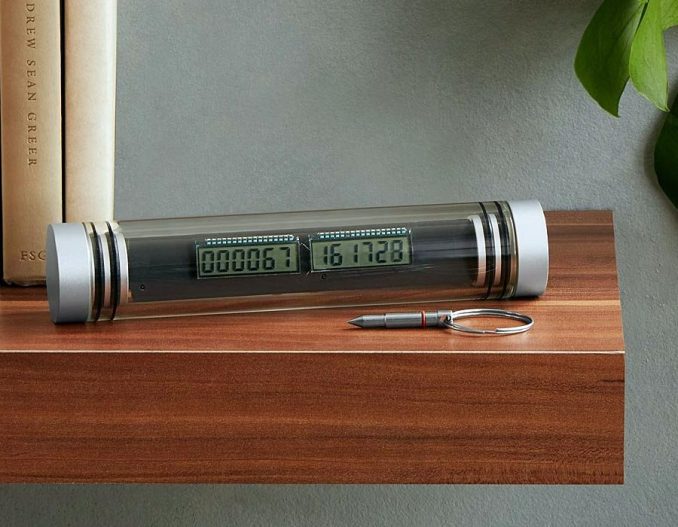 This Time Since Launch Clock is a grand way to mark any momentous event in your life, such as a wedding, birth of a child, graduation, or the day you launch a new business.

Inspired by the astronaut John Glenn, who started a stopwatch when he launched into space and became the first American to orbit Earth, this Time Since Launch Clock is exquisitely made of precision-machined metals and durable borosilicate glass. Just pull the stainless-steel launch pin at the moment you want to commemorate, and the timer will make it yours forever—or 2,738 years, the length of time the timer counts.

Count up the days from a single moment with this clever time “capsule.” Whether it’s the day you moved into a new home, had a baby, or quit smoking, the time piece makes a truly unique gift for the person whose life is about to change forever. Here’s how it works: Pull the stainless-steel launch pin to initiate the timer, and the instant is burned into a chip, making it yours forever (it actually counts for 2,738 years). Made with precision-machined metals and durable borosilicate glass, it’s assembled in Brooklyn by Che-Wei and Taylor Levy, who were inspired by astronaut John Glenn—he started a stopwatch when he launched into space and became the first American to orbit Earth.

Buy the Time Since Launch Clock for $160 at Uncommon Goods. It’s on pre-order, with shipments expected in early 2019.

Telling time can become an out-of-this-world experience with the Orbit Planet Clock, as three planets and the sun help keep track of the passing minutes and hours. Designed to look like a miniature solar system (minus a few planets), this unique clock uses magnets to […]

There’s no need to look any further than the Ziiiro Aurora and Ziiiro Orbit for watches that are simply out of this world. It might make reading the current time a bit difficult, but what it lacks in ease of use, it makes up for with […]

If you’re serious about your lawn and want to keep pesky animals out of your yard or garden, the Orbit Motion-Activated Sprinkler is the 21st Century answer to sitting on your front porch with a shotgun. Water sprinklers are great for keeping animals out of […]