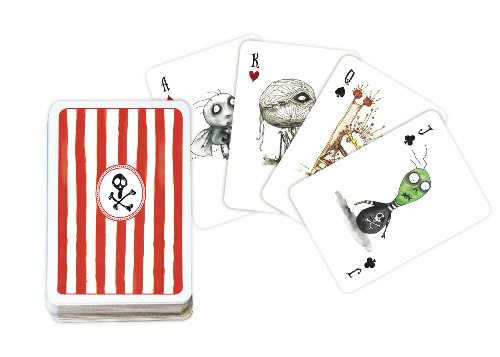 Fans of Tim Burton’s work now have a playing card set just for them. Tim Burton Playing Cards feature a bunch of his creepy characters.

Whether you are playing war or poker, you will be doing it in Tim Burton style with creepy Kings and Queens and they feature a skull design on back, making them look like a card game straight from one of his movies.

The four illustrations shown are the characters in the deck. Only $4.99 from Amazon. They make a great gift.

Tim Burton’s The Nightmare Before Christmas Clue is a fun new way to play the classic Clue game. Sandy Claws has been kidnapped! You have to solve the mystery of who kidnapped him, what item was used, and where he was hidden in time to […]

Science and games mix with these Periodic Table Playing Cards. I imagine that every lab geek everywhere will be neglecting their duties to play a few games after they buy this card set. How else are you going to play with chemicals without wearing protective […]

Pancakes are better than toast, which is why I like these Pancake Playing Cards even more than the Toast Card Deck. Each card pictures a delicious pancake image, giving you something yummy to look at while you wait for your turn. Of course the reverse […]

Whether you align yourself with the Starks, the Lannisters or another house, chances are you are fighting for the iron throne. Take a break and play a card game with these Game of Thrones Playing Cards. These playing Cards feature images of popular characters from […]