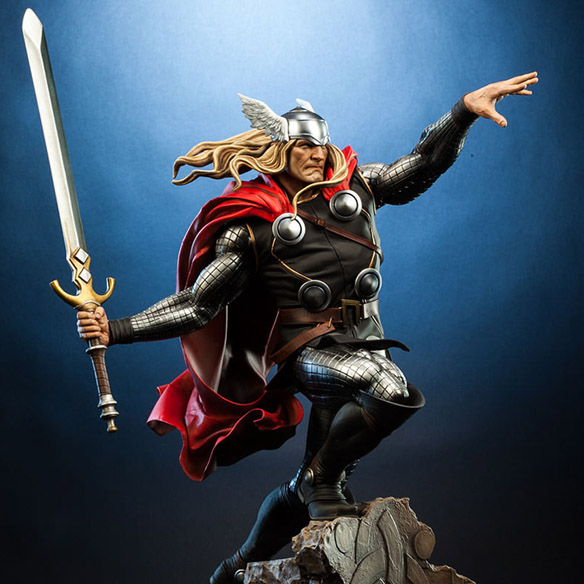 Hollywood has given the Thunder God a real-life face these days but the Thor Modern Age Premium Format Figure will still be something near and dear to the hammer-wielding god’s comic book fans.

If Chris Hemsworth is the only Thor you care about, then you’ll probably be more interested in the movie version premium format figure but those fans who have been following the adventures in Asgard before Hollywood got interested are probably still drooling over this bad boy, featuring Odin’s son with his modern, armored-up look.

The statue stands 20-inches high (22-inches when holding sword) and features Thor’s classic winged helmet, intricately sculpted metallic mail, a hand-tailored fabric tunic with gold piping and armor disc plates, his trusty hammer, Mjolnir, and the Odinsword, Ragnarok. The statue also has an oddly-placed left hand that looks really weird but I’m willing to overlook that bit of strangeness because of the figure’s awesomeness.

The Thor Modern Age Premium Format Figure will be available March 2015 but it can be pre-ordered now for $439.99 (or for as little as $73.33/month) at Sideshow Collectibles.

Thor might be one of the mightiest Norse gods around and his lightning-summoning hammer is impressive but the word ‘Mjolnir’ doesn’t exactly roll off the tongue, which is why we now have the Thor The Dark World Mew-Mew-Mjolnir Kitty. Most people would probably just avoid […]

These Thor Mjolnir Hammer Cufflinks bring the hammer down on your fashion sense. What could be better than Thor’s hammer on your cuffs? And you can pick them up, because you are worthy. Now the power of the Mjolnir hammer will be with you at […]

You can wield the power of the God of Fashion with the Mjolnir Cigar Box Thor Purse. You don’t even have to be worthy in order to carry it. This purse won’t let you fly but Thor’s mighty mallet doesn’t let you carry stuff in […]