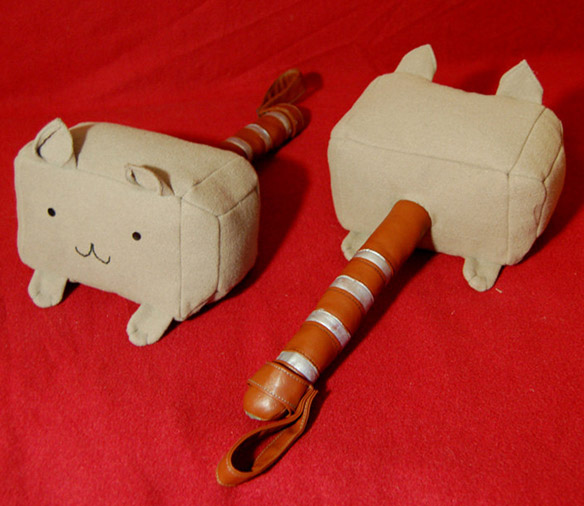 Thor might be one of the mightiest Norse gods around and his lightning-summoning hammer is impressive but the word ‘Mjolnir’ doesn’t exactly roll off the tongue, which is why we now have the Thor The Dark World Mew-Mew-Mjolnir Kitty.

Most people would probably just avoid using the formal name of Thor’s hammer if they had any doubts about how to pronounce it, but Darcy accepted the challenge with no problem at all in Thor: The Dark World, proudly christening the mighty mallet as mew-mew. It doesn’t exactly strike fear in the bad guys so I’m not surprised Thor opted to stick with the original name.

The Mew-Mew-Mjolnir, made of wool, leatherette, and polyester, looks like a playful kitten and can be made in two sizes. There’s no mention on measurements but the large version looks to be about the size of the hammer carried by Thor in the movies. 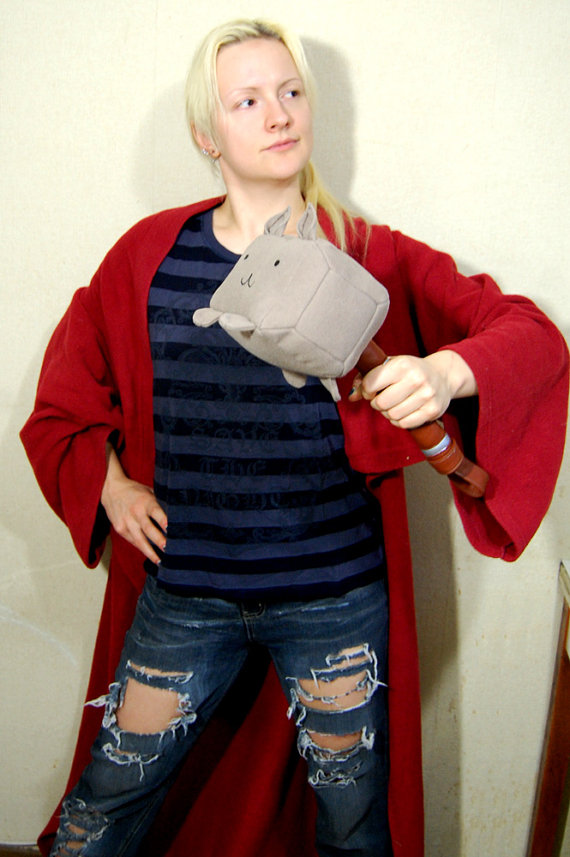 Not surprisingly, since Christmas is right around the corner, the Thor The Dark World Mew-Mew-Mjolnir Kitty is sold out at the moment but the designer promises a new batch is on the way. They will be available for $25.30 at TwinsGeekShop’s Etsy store.

Cats have nine lives and the Doctor has… well, a lot of lives, so it makes perfect sense to merge them together with these Doctor Mew T-Shirts. Artist Jenny Parks brings us all thirteen incarnations of the Doctor as cats, and she’s done a great […]

If you’ve always wanted to wield the mighty Mjolnir, but are too practical for toys, you need this awesome Marvel Thor Mjolnir Hammer Tool Set. It is a complete 44 tool set with everything you need to accomplish many household and automotive fixes, housed in […]

These Thor Mjolnir Hammer Cufflinks bring the hammer down on your fashion sense. What could be better than Thor’s hammer on your cuffs? And you can pick them up, because you are worthy. Now the power of the Mjolnir hammer will be with you at […]

You can wield the power of the God of Fashion with the Mjolnir Cigar Box Thor Purse. You don’t even have to be worthy in order to carry it. This purse won’t let you fly but Thor’s mighty mallet doesn’t let you carry stuff in […]

Combine the superior power of a Wookie with the cute cuddliness of a cat and you have Mew-Bacca, the cat who can rip a droid’s arm out of its socket if it gets mad. This MEW-BACCA Mug is the perfect coffee mug for Star Wars […]

Become the god of beverages with the Thor Mjolnir Ceramic Sculpted Mug… but only if you’re worthy. Jane Foster is currently kicking butt as Thor so you’ll have to wait your turn to get your hands on Mjolnir. However, you can grab hold of this […]