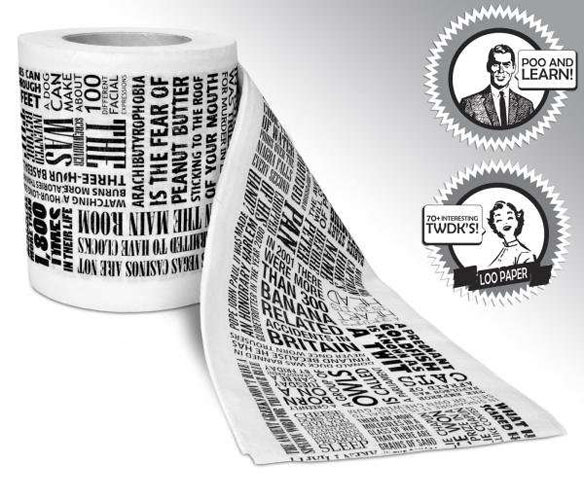 Sometimes the most brilliant of ideas (not odors) manifest in the loo of all places. But seldom do we get the chance to learn a bunch of rubbish and useless facts in there. When you install the Things We Didn’t Know Toilet Paper roll, brought to you by the U.K., trips to the toilet suddenly turn into long excursions to the think tank.

And I thought having three-ply toilet paper meant you were living large. It looks like toilet paper is starting to get really fancy. Did you ooh and ahh over the Measuring Tape Toilet Paper and the Maze Toilet Paper seen previously GeekAlerts? The Asses of Evil Toilet Paper was a goodie, too.

Things We Didn’t Know Toilet Paper fills the void of what you never learned in school. The roll is chockfull of things that have never occurred to you, like the proper name for fear of peanut butter. Plus they’ve tossed in a few jokes… probably of the British variety if you can handle it. Each square is loaded with black, bold newspaper headline print, preventing you from squandering the T.P. like a wasteful human.

Keep a few rolls of this toilet paper around for those depressing winter months, like the present, just as you would a stack of Monty Python DVDs. To buy the Things We Didn’t Know Toilet Paper, go to I Want One of Those where it’s £6.99 each.

Give your guests something to chuckle about with this Polaroll Toilet Paper Holder. This toilet paper holder looks just like a Polaroid camera, but this one dispenses toilet paper instead of film. It’s better than an actual camera in your bathroom. Your guests will love […]

If you think that your toilet is your own personal throne and that nothing substandard should ever touch your bottom, then you might want to get several rolls of the Money Toilet Paper. It’s printed with over thousands and thousands worth of hundred dollar bills, […]

Thinking of going all out this Christmas season? Then you definitely should change all the regular old rolls of TP in your bathroom to the Santa Toilet Paper. Nothing can shoo away the blues better than wiping your tush with jolly images of Santa Claus […]