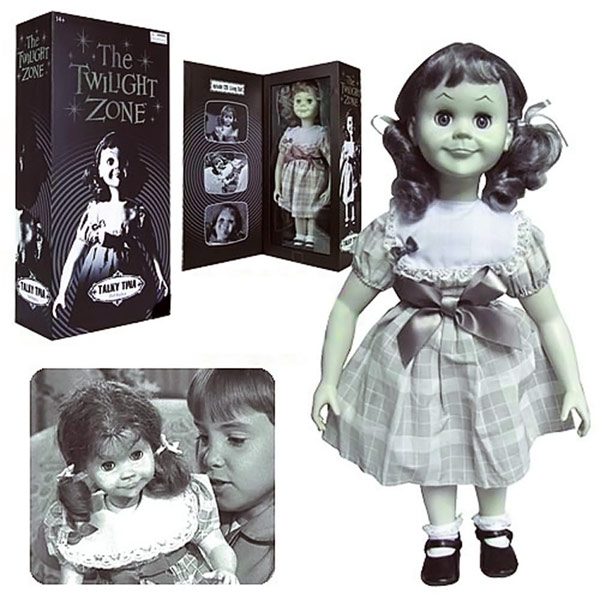 You’re traveling through another dimension, a dimension not only of sight and sound, but of mind. A journey into a wondrous land where the Twilight Zone Talky Tina Doll Replica might be more than a simple doll. Are you brave enough to find out?

Anything is possible within the twisted realms of the Twilight Zone, so it might take some courage to bring a bit of the Zone home with you. This 18-inch-tall doll looks just as innocent as she did in the classic ‘Living Doll’ episode… and that fact might not be very comforting if you remember that Tina wasn’t exactly innocent back then.

Just like the doll featured in the TV series, Tina has a rotocast vinyl head, arms, and legs; soft fabric body and fabric clothing; rooted hair; eyelids that open and close; and a talking mechanism.

And yes, just in case you were wondering, Tina is just as talky as ever, speaking the following lines:

In addition to possessing a timeless ability to creep people out, the replica also comes with a certificate of authenticity.

The Twilight Zone Talky Tina Doll Replica is available for $149.99 at Entertainment Earth and $179.99 at Amazon.com.