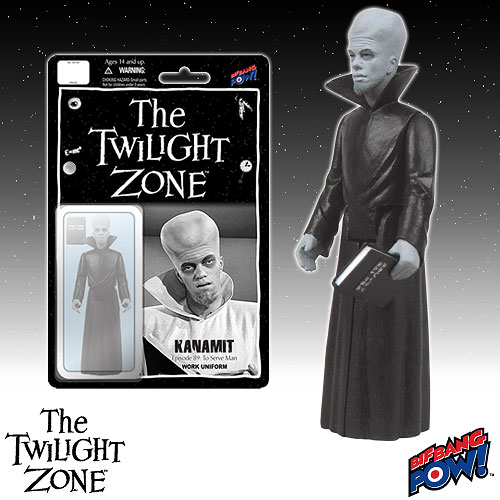 You’re traveling through another dimension, a dimension not only of sight and sound, but of cannibalism. The Twilight Zone Kanamit In Work Uniform 3 3/4-inch Action Figure brings us one of the many interesting characters introduced on the classic television series, The Twilight Zone.

The poor Kanamit. He’s grown tired of eating the same old stuff and he’s looking for a new ingredient to add a little spice to mealtime. Fortunately, he’s found a new type of meat – human.

This 3 3/4-inch scale figure might not be the most articulated action figure around, with only four points of articulation (neck, shoulders, and hip), but it does offer a pretty good sculpt of actor Richard Kiel (known to James Bond fans as the metal-mouthed Jaws).

Of course, you can’t prepare a new dish without having a few recipes to study, so the Kanamit comes with his cookbook, a very informative bit of literature with an alien title that translates into ‘To Serve Man.’

The Twilight Zone Kanamit In Work Uniform 3 3/4-inch Action Figure will be available July 2014 but it can be pre-ordered now for $9.99 at Entertainment Earth.