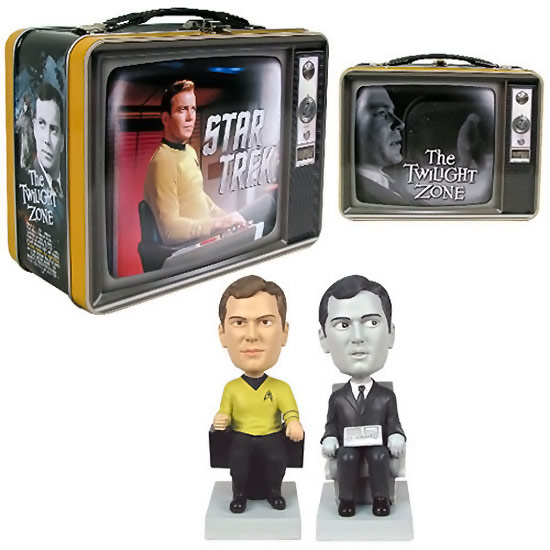 William Shatner is a great actor. I’m serious. No one else could have played Captain Kirk. We have his role in the Twilight Zone to thank for that. Celebrate both of his awesome sci-fi roles with these Star Trek / The Twilight Zone The Captain and The Passenger Monitor Mates.

They come in a one-of-a-kind dual-themed tin tote. Fans of William Shatner will never be alone again as these monitor mates will keep you company.

Shatner meets Shatner! Worlds collide as Bif Bang Pow! brings two legendary brands together in one incredible set featuring William Shatner characters from two of television’s greatest series. This set includes two 4-inch scale Monitor Mate miniature bobble heads of William Shatner as seen in two of his most revered roles: airline passenger Bob Wilson and U.S.S. Enterprise Captain James T. Kirk. And they come inside an incredible dual-themed tin tote featuring an exclusive and never before crossover of these legendary brands. The images show Kirk on the bridge of the Enterprise on one side, with an image of Bob Wilson and the Gremlin on the other. No The Twilight Zone or Star Trek collection is complete without this! The tin tote measures approximately 8 5/8-inches wide x 6 3/4-inches tall x 4-inches deep.

This cool set is only $39.99 from Entertainment Earth.