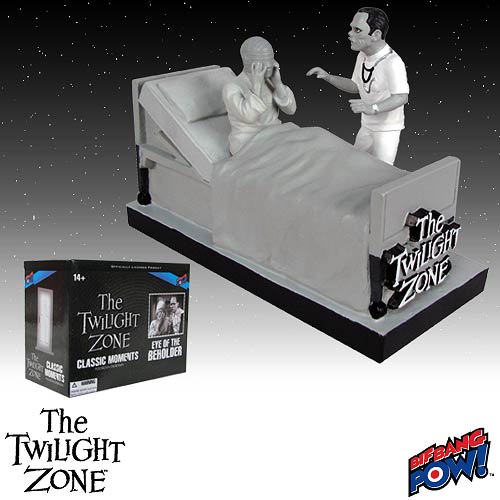 Quick! Think of a popular episode from television series where no faces were seen for the majority of the show. Well, the Twilight Zone Eye of the Beholder Diorama was probably a clue but it’s still an interesting fact.

Twilight Zone fans sat on the edges of their seats when Eye of the Beholder originally aired, wondering about the horror that would be revealed when the doctors and nurses indicated the surgery had failed, and that moment before the great unveiling is captured with this 7 1/2-inch wide x 5-inch tall x 3 1/2-inch deep resin diorama that shows the sympathetic Dr. Bernardi anxiously waiting to see if he was successful in curing poor Janet Tyler of her physical deformity. The only thing that would make this better would be if an interchangeable head had been included to show the patient with bandages removed. Curse those missed opportunities.

Painted in greyscale to mimic the classic black-and-white television series, the Twilight Zone Eye of the Beholder Diorama is available for $29.99 at Entertainment Earth. Also at Amazon.com.