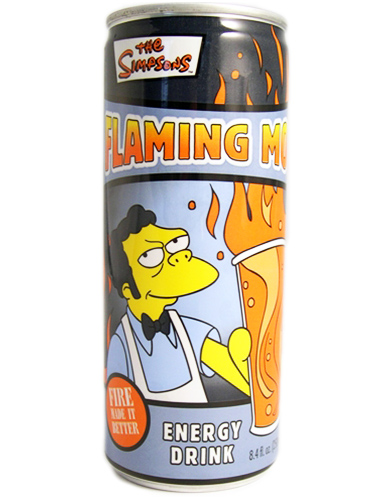 You may be surprised to learn, as I was, that the classic “Flaming Moe’s” episode of The Simpsons’ is from way back in the third season. It was actually the tenth episode of the third season and originally aired on November 21, 1991. I would have guessed it was a much more recent episode, but perhaps that confusion is from seeing the rerun so many times.

The Flaming Moe put Moe’s Tavern on the map in a classic episode of The Simpsons! The Flaming Moe Energy Drink will give you all of the energy of the Flaming Moe, and none of the kick! Flames not included.

Order The Simpsons Flaming Moe Energy Drink for $4.94 per can at Amazon.com.

GeekAlerts has shown you some pretty cool Energy Drinks in the past (Zombie Survival Energy Drink, Moustache Elixir, Bunny Spaz Juice, etc.), but none have been made with hemp seed oil like the Cannabis Energy Drink. Each 250ml can is sure to have you flying […]

We’ve shown you almost every energy drink out there: Ghostbusters, Duff, Romulan Ale and Happy Bunny Spaz Juice; so why not one more.  Superman Energy Drink is the only drink strong enough to quench the thirst and energy needs of the Man Of Steel himself.  […]