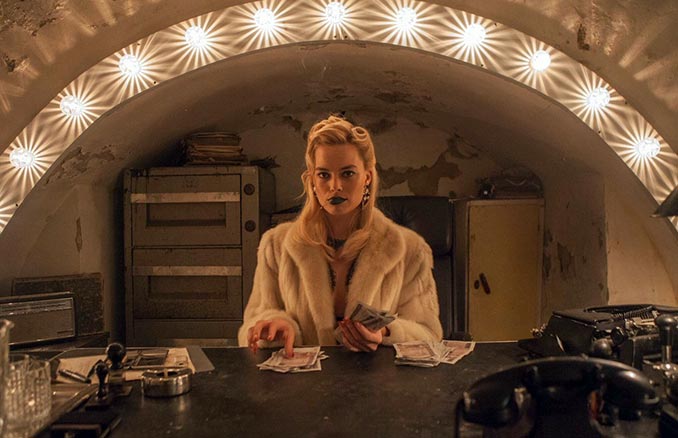 Judging from the Terminal Trailer RLJE Films, this looks to be one crazy and interesting movie. The film stars Margot Robbie as Annie, “a curious waitress leading a dangerous double life.” Her character seems quite mad, and as we saw in Suicide Squad, Robbie plays crazy very well. Also starring in the film are Simon Pegg, Max Irons, Mike Myers, and Dexter Fletcher. Terminal will be in theaters on May 11.

In the dark heart of a sprawling, anonymous city, TERMINAL follows the twisting tales of two assassins carrying out a sinister mission, a teacher battling a fatal illness, an enigmatic janitor and a curious waitress leading a dangerous double life. Murderous consequences unravel in the dead of night as their lives all intertwine at the hands of a mysterious criminal mastermind hell-bent on revenge.

Here is the Terminal Teaser Trailer from a few days ago:

Doctor Who Truth or Consequences T-Shirt

Osgood returns on the Doctor Who Truth or Consequences T-Shirt. It was a shocking moment to see Missy (Boo! Hiss!) kill Osgood just to prove that she was bad. Pretty sure everyone already knew that. Fortunately, there was a spare Osgood trying to prevent a […]

Tom Cruise is back as Ethan Hunt in Mission: Impossible – Fallout and a few new faces are added to his IMF team. Henry Cavill (Superman, Man from U.N.C.L.E.) stars as August Walker, Michelle Monaghan as Julia Meade and Simon Pegg and Ving Rhames return […]

A blast from the past, the Vintage Double Thermos has that unmistakable 70’s color palette going for it. Have you ever seen such a doohickey before? This is a first for me. You could have a two-day supply of coffee in the double thermos, or you […]

There’s no need to decide between real-world or virtual playtime with the Virtual and Terrestrial Battling Robots because you can switch seamlessly between the worlds that exist inside and outside the computer as you wage war against your robot rival. You can use the remote […]