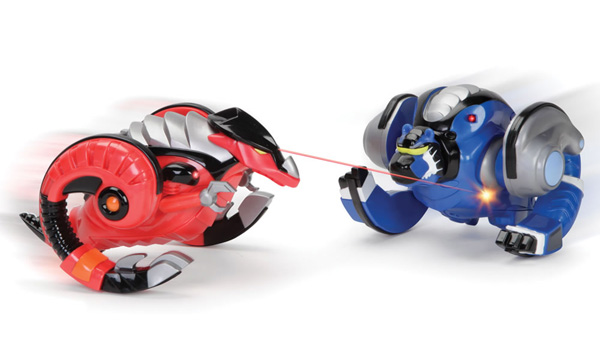 There’s no need to decide between real-world or virtual playtime with the Virtual and Terrestrial Battling Robots because you can switch seamlessly between the worlds that exist inside and outside the computer as you wage war against your robot rival.

You can use the remote control to guide your robot around real-world obstacles, firing radio frequency waves at your robotic opponent in an effort to claim victory in battle from up to 49 feet away. The agile little robots emit explosive sounds when launching attack or suffering a hit, which is logged by LED’s in the remotes.

When it’s time to take the battle to the world within the computer, just plug the robot into your computer with the included USB cable and let the website create an online avatar for your battling robot. At that point, your robotic war basically becomes an online video game, even allowing you to earn additional weapons that can be downloaded to your ‘bot, making it even more awesome than it already is.

You can show complete robotic domination with the Virtual and Terrestrial Battling Robots for $99.95 at Hammacher Schlemmer.

Let the ultimate battle between thumbs begin with the Omnibot Battroborg Fighting Robots Thumb War, and find out who has the mightiest thumb of all. You probably don’t want to send your thumb into battle without proper preparation so suit up with either a red […]

6 Solar Robots in One Kit

With this cool DYI solar robot kit you will get six types different robots for the price of one.

If you like robots and board games you’ll be happy to know that both are combined in Robots! The Game. This game is for ages 6 years and up and for 2-4 Players. The robot factory has started to implode from too much evil science, […]