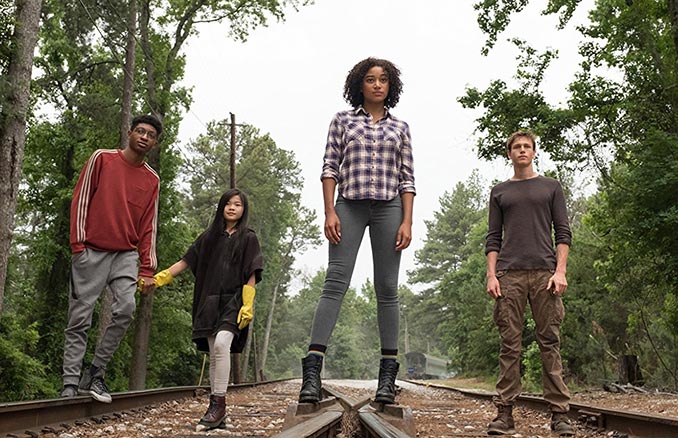 Today 20th Century Fox released the official The Darkest Minds Trailer, a science fiction movie where teens develop powerful new abilities. This scares the adults and the government declares them a threat. After escaping detainment, some of the teens realize that finding a safe haven is not the solution—they must fight back. The Darkest Minds stars Mandy Moore, Amandla Stenberg, and Gwendoline Christie. It is from the producers of Stranger Things.

When teens mysteriously develop powerful new abilities, they are declared a threat by the government and detained. Sixteen-year-old Ruby, one of the most powerful young people anyone has encountered, escapes her camp and joins a group of runaway teens seeking safe haven. Soon this newfound family realizes that, in a world in which the adults in power have betrayed them, running is not enough and they must wage a resistance, using their collective power to take back control of their future.

Are you crazy in love? Occasionally call your sweetie Puddin’? Sounds like the Harley Quinn Ruby and Black Diamond Ring might be the engagement or wedding ring you’re looking for. Ditch the wedding dress and pull out the red and black harlequin outfit because it’s […]

Although it looks like an ordinary power strip, the Wet Circuits Safe Power Strip is quite remarkable. It is the world’s first and only water resistant power strip, and is able to safely withstand rain, snow, wet hands, and water spills while continuing to function […]

Last week we had the Monster Giveaway, our most popular sweepstakes to date. Now it is over and the winner has been notified by email. Stay tuned for more great giveaways. We completed hands-on reviews of a number of products including the UCLEAR HBC120 Snow […]

Rubies are a girl’s best friend with the Catwoman Ruby Edition Variant Maquette. Julie Newmar’s purrrfect feline femme fatale is all about the shiny on this approximately 12-inch-tall statue that features the classic character from the 1960s Batman television series wearing her iconic outfit while […]

Almost everything you use for work or for your other day-to-day chores and activities require electricity. Sometimes, the jumble of wires and plugs you’ve got plugged into your outlets can be a hot mess. I have one of those long, horizontal power strips that sometimes […]