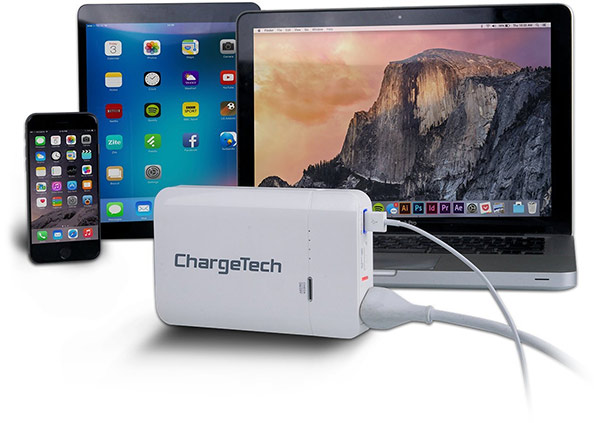 If you love gadgets, chances are you have a portable external battery pack for recharging your phone and tablet on the go. These work great for giving extra juice for your devices, just as long as they can recharge via a USB cable. However, now there is a portable charger that goes beyond the USB port and can also power devices that plug into 120V AC wall outlets. Learn how it works in this hands-on ChargeTech Portable Power Outlet Review. 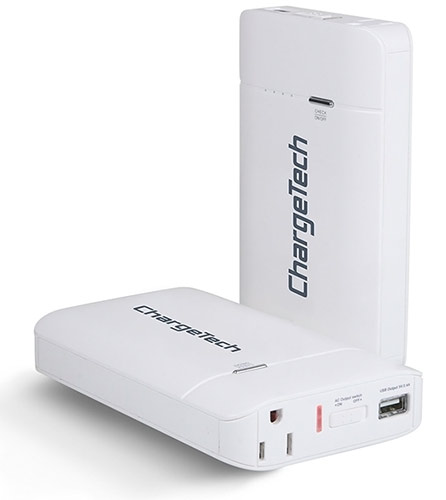 Yes, you read that correctly, this portable battery pack actually has a 120 volt outlet on it! In fact, ChargeTech says it is “the world’s smallest battery pack to include an AC wall outlet.” While larger than typical USB chargers, it quite compact—about the size of a thick paperback book. In addition to the 3 prong outlet, there is also a USB port (two on the large model).

Don’t expect it to run a high power appliance, like an air conditioner or hair dryer, as it has a limit of 65W (85W for the large model) of power. Besides, even if you could provide enough current, such a demanding appliance would very quickly drain the battery. Instead it is made for things like plugging in your laptop computer, recharging cordless power tools, running energy efficient photography lights, and powering smaller appliances like a desktop fan. 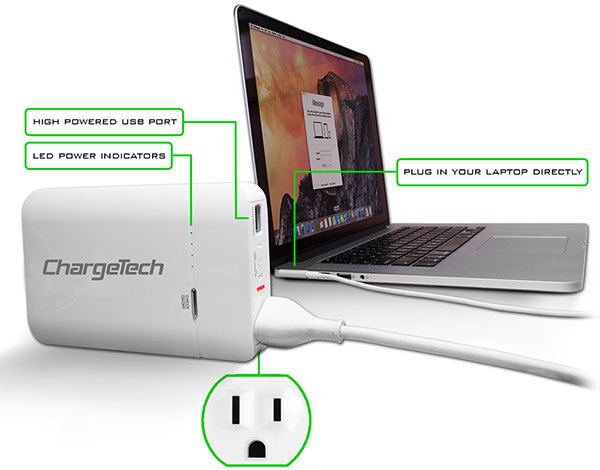 The capacity of the ChargeTech Portable Power Outlet is 12000 mAh (18000 mAh for the large model). They say that this is enough for 4+ hours of working on a MacBook Air, 20+ hours of browsing on an iPad, or 80+ hours of talking on an iPhone. Another way of looking at it is that it can charge a Galaxy S5 almost 4 times, an iPhone 5S 5-6 times, or give an iPad Air a full charge.

In hands-on testing of the 12000 mAh model, I was able to give a Nexus 7 tablet a full charge, run some photography lights for a short time, and then give an LG G3 a full charge. After that, it was time to recharge the ChargeAll.  Next I was able to charge my laptop to 60% using the AC outlet on the ChargeTech before it ran out of juice.  While it is disappointing that it didn’t give my laptop a full charge, keep in mind that this is a Sony Vaio desktop replacement with a bright 17.3″ display and Intel Core i7, and therefore a large battery to go with it. In comparing the specs, I calculate that an 11″ MacBook Air would have taken on a full charge and a large ChargeTech (18000 mAh model) would give a full charge to a 13″ MacBook Air. 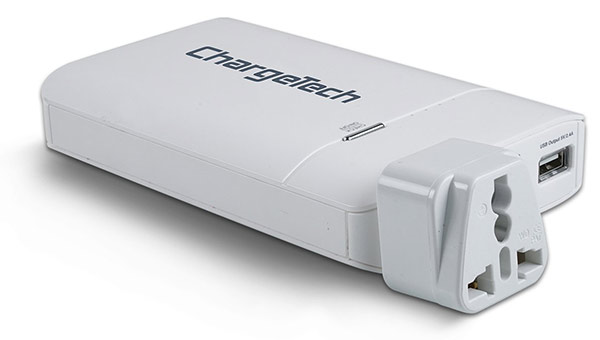 The USB output on the ChargeTech is rated for 2.4 Amps, and it did an excellent job of charging my devices just as quickly as the OEM AC adapters.  What is really impressive is how quick it was to recharge the ChargeTech itself.  According to the specs it takes 2-3 hours to recharge, but for me it fully recharged in just under 2 hours.  This speed is due to it using a wall adapter (included) with a 20V output, rather than a 5V USB plug.  While charging about 4 times faster is great, unfortunately this means bringing and extra wall adapter with you and losing the convenience of USB charging.

If you need to plug in something that doesn’t have the standard US plug, they’ve got you covered by including an international conversion adapter (pictured above).  They also include a felt travel pouch.

The bottom line is that the ChargeTech worked, and besides for only charging my laptop up to 60% instead of 100%, it generally lived up to its promises.  Yet if all you need is USB power, you are better off with other portable power banks that are smaller and less expensive.  However, if you need a portable AC power outlet for a device that is under the 65W/85W power limit, the ChargeTech Portable Power Outlet is a great device.  In fact, it is easy to justify the expense if you will use it for a device needed for work, be it a laptop computer or a power drill.

Frequent travelers know all too well the dearth of electric outlets in a typical hotel room. Even hotel suites at new, high-end hotels just don’t have enough outlets for your average geek or gadget junkie to plug in a couple computers and recharge a couple […]

Sometimes it seems like there’s never a USB plug around when you need one. Though there are always standard electrical outlets everywhere. The Pivot Power Mini – Wall Plug/USB Combo will help. This handy device lets you plug in four things into one outlet. Plug […]

One thing I don’t like about traveling is when time comes that I have to charge my device. There’s the whole hassle with adapters and checking to make sure that you’re plugging in the chargers in the right sockets. There’s also the rare occasion where […]

So you’ve got the new iPad, the iPhone 5 and a bunch of other electric gadgets; now you need to ensure that you can use them. The Battstation – Rugged Water-Resistant Power Bank was designed by iBattz to give users a portable and durable battery […]