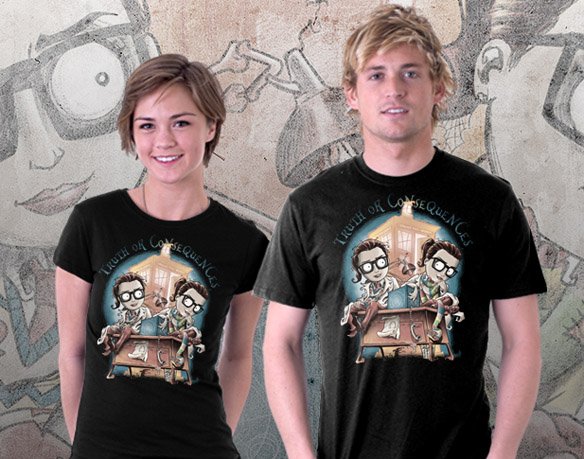 Osgood returns on the Doctor Who Truth or Consequences T-Shirt.

It was a shocking moment to see Missy (Boo! Hiss!) kill Osgood just to prove that she was bad. Pretty sure everyone already knew that. Fortunately, there was a spare Osgood trying to prevent a Human/Zygon war in The Zygon Invasion and The Zygon Inversion, and by the end of that last episode, the duo of Osgood and Osgood had been restored.

SAQMAN creates an eye-catching Doctor Who scene that couldn’t been inspired by the work of Tim Burton, with Osgood x 2 sitting on a desk with an Osgood box between them and the TARDIS behind them. 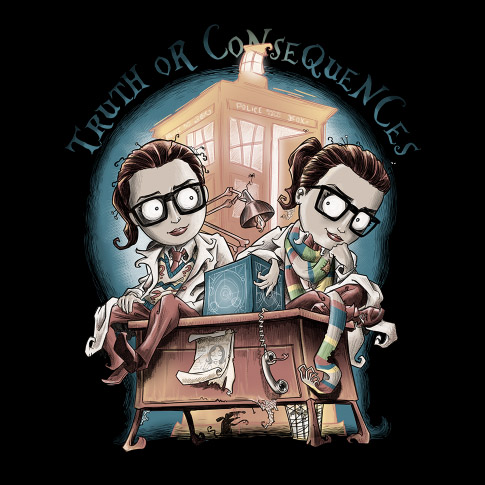 The Doctor Who Truth or Consequences T-Shirt is available for $20 at TeeFury.

My life-long fantasy of owning a full-sized pinball machine seems pretty ridiculous now that the iPad has gotten so darn close to simulating the real thing. Duo Pinball has come out with Arcade Styled Pinball for iPad, and all that you need to play is […]

Doctor Who ‘Doctor With One Heart’ T-Shirt

The Doctor gets a helping hand with love on the Doctor Who ‘Doctor With One Heart’ T-Shirt, and I hope Whovians get a little chuckle out of that handy reference. He’s been called Meta-Crisis Doctor, Ten II, the human Doctor, and Doctor 10.5, but he’ll […]

No mere Earthling can match the always-fashionable wardrobe of a Time Lord but the Doctor Who 11th Doctor Costume T-Shirt lets you do the best you can… and you don’t even have to learn how to tie a bow tie. You can keep the comfort […]

It’s never too late to add last minute touches to your Halloween party. The Korg: Monotron Duo and Delay puts the thrill of an analog synthesizer into your hands. Create some ghoulish sounds or just have some fun friends and work on your next big […]