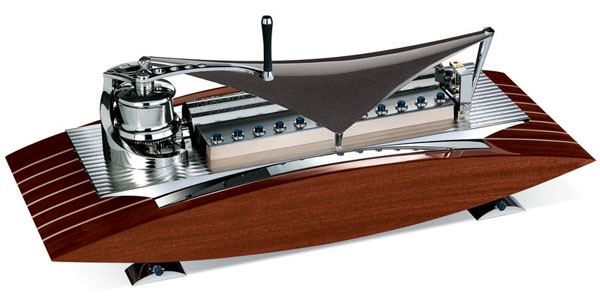 Ideally we all want to seem smart and sophisticated while still maintaining our cool; I even took a classical music class in college.  A good mix would be somewhere between Big Bang Theory’s Sheldon and Lost’s James “Sawyer” Ford. It’s doubtful that you’re going to turn into that, so in the meantime you might as well continue to buy things that make you look the part.  When your neighbor tells you about his new Bose stereo system, you can tell him about your Swiss Watchmaker’s Boîte à Musique.

This Swiss-crafted music box requires a three-month, 34-step production process for completion and produces four different 50-second musical selections exactly as they would sound from 19th century music boxes.  I guess good things come to those who wait!  Display this music box anywhere in your house and your friends will think you ooze sophistication and money; since it costs a cool $28,900.

This is the Swiss-crafted music box that transforms meticulous watch movement into mellifluous melody. This heirloom is expertly crafted by Reuge-renowned horologists since 1865-in Sainte-Croix, Switzerland, considered the birthplace of the mechanical music box. Requiring a three-month, 34-step production process for completion, its accurate Cartel 4.144 movement includes a rotating brass cylinder lined with resin for ideal tonal quality and set with 3,800 wire pins that pluck two 72-note tempered-steel combs in perfect time. Each tooth is tuned to a specific frequency; lower notes are weighted for ideal sonority and are dampened with kevlar “feathers.” The music box produces four different 50-second musical selections exactly as they would sound from 19th century music boxes: Vivaldi’s The Four Seasons, Liszt’s Hungarian Rhapsody, Verdi’s La Traviata, and Bizet’s Carmen. It is finished with a carbon fiber “sail”, a winch-like winding mechanism, a polished, maple-inlaid mahogany “deck”, and a brushed nickel base plate. 4 3/4″ H x 8 3/4″ W x 22″ L. (12 lbs.)

You can purchase the Swiss Watchmaker’s Boîte à Musique at Hammacher Schlemmer for $28,900.

If a vintage music box was designed for the sci-fi crowd, it would look just like the Swiss Musical Starship because that’s exactly what this sleek spaceship is. Music boxes are cool but the awesome-factor has just been launched into the stratosphere with this geeky […]

For doing chores around the home, you’ve got the Kelvin 23 Super Tool. For everything else, you only need to turn to the Swiss Tech Bodyguard 7-in-1 Emergency Tool; it’s got you covered. I remember this kid back in class who we called the “boy […]

We just had the Giant Swiss Army Knife entry and it’s already time for yet another product from the Delémont based Wenger company. With the Swiss Business Tool ($100) they have removed the blade and moved into your office in the shape of a tool […]

The Swiss army knife with USB drive has been around for a while in a 2GB model. Now you can get a similar multitool with an 8GB storage capacity.

A couple of months ago we saw the release of the 8GB Swiss Army Knife. Now you can get the famous multifunction pocket tool with a 16GB storage capacity, and they have even managed to squeeze in a LED flashlight this time.

Last time we saw the Swiss army knife here at GeekAlerts, it was a model equipped with a 16GB USB drive. Now the Victorinox company has managed to squeeze in a digital thermometer and altimeter into their famous multifunction pocket tool.

The KeySmart Swiss Army Style Key Organizer offers a new way to hold your keys. This minimalist keyring is made of Aircraft Aluminum with Stainless Steel Hardware. Now you can hold your keys like a Swiss army knife. It doesn’t take up as much room […]

We’ve seen the famous Swiss knife as a stapler and in sizes you didn’t think was possible. Now the time has come for the product to move into a pen. The SwissPen X-1 Multi-Function Executive Pen ($50) includes a map light, scissors, screwdriver, nail file, […]