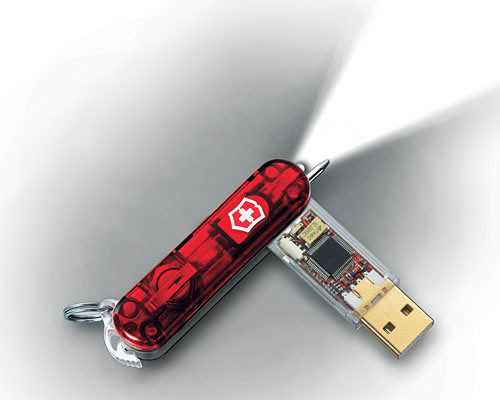 A couple of months ago we saw the release of the 8GB Swiss Army Knife. Now you can get the famous multifunction pocket tool with a 16GB storage capacity, and they have even managed to squeeze in a LED flashlight this time.

The USB flash drive is removable and you will also get a retractable ball point pen. Another bonus is that it’s actually an original Swiss army knife this time, manufactured by the Victorinox company.

The SwissFlash Flight 16GB Knife is yours for $212 from Victorinox Swiss Army.

Last time we saw the Swiss army knife here at GeekAlerts, it was a model equipped with a 16GB USB drive. Now the Victorinox company has managed to squeeze in a digital thermometer and altimeter into their famous multifunction pocket tool.

The Swiss army knife with USB drive has been around for a while in a 2GB model. Now you can get a similar multitool with an 8GB storage capacity.

November 26 is your one and only day to take advantage of Amazon.com Cyber Monday Deals 2012. Throughout the day they are having Lightning Deals, which are super discounts that are only available in limited quantities. You’ll be able to browse discount deals in video […]

After having seen stapler, pen and giant versions of the Swiss army knife, what could be next? The answer is one that glows in the dark.

We’ve seen the famous Swiss knife as a stapler and in sizes you didn’t think was possible. Now the time has come for the product to move into a pen. The SwissPen X-1 Multi-Function Executive Pen ($50) includes a map light, scissors, screwdriver, nail file, […]

There are a lot of different kinds of USB flash drives, and it’s fun and easy to find one that’s quite unique. The Leica M3 USB Flash Drive is based upon the legendary Leica M3 35mm camera, which was introduced in 1954, and combined a […]