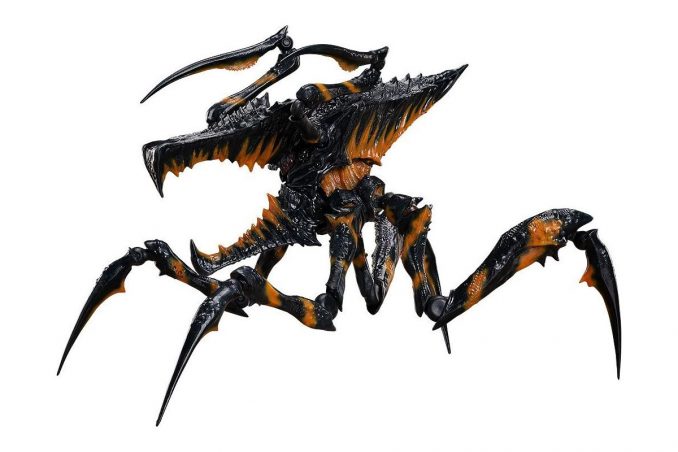 This Starship Troopers Warrior Bug Figma Action Figure is perfect for fans of the 2017 film Starship Troopers: Traitor of Mars. It’s incredibly detailed and loaded with smooth, posable joints so you can recreate your favorite scenes from the movie or create some new ones of your own.

Besides for the Warrior Bug, this also comes with two Power Suit miniature figures, one of which comes with both a generic soldier head and a Johnny Rico head, so you have the choice of how it looks.

Invasion of the bugs! From the 2017 film Starship Troopers: Traitor of Mars comes the Starship Troopers Warrior Bug Figma Action Figure! This standard infantry unit of the Arachnid species, the smooth yet posable figma joints allow you to act out a variety of different scenes from the movie. Two kinds of Power Suit miniature figures in the same scale as the Warrior Bug are included. The standing pose miniature figure comes with both a Johnny Rico head part and generic soldier head part. Using special parts, the injured pose miniature figure can be displayed with the Warrior Bug to recreate intense combat scenes from the movie. An articulated figma stand is included, which allows various poses to be taken.

This Starship Troopers Warrior Bug Figma Action Figure is available to pre-order for $137.99 at Entertainment Earth.

No, your child isn’t about to eat a real bug (thank goodness!) Rather, it’s just one of the extremely realistic and detailed buggy treats you can cook and mold with the Gummi-X Bug Centre. Want to fill your bugs with gooey fillings or use flavored jellies […]

It will be summer soon so it will be a good time to cool off with some popsicles. Why not make a different kind of popsicle? Something fun and playful. Like these Bug Pops. You get of 6 popsicle molds shaped like bugs, so there’s […]

Do you have a bunch of unwanted pests in your home? I’m not talking about your friends and relatives. I’m talking about bugs. A spider or two is no problem since they keep most bugs away, but if you have a large bug problem you […]

Few things in life are as scary as the aliens from the Alien movie, but this Alien Extreme Warrior Head Knocker is kind of cute. This extreme Warrior bobble head stands 10-inches tall and will happily nod and agree with everything that you say. This […]