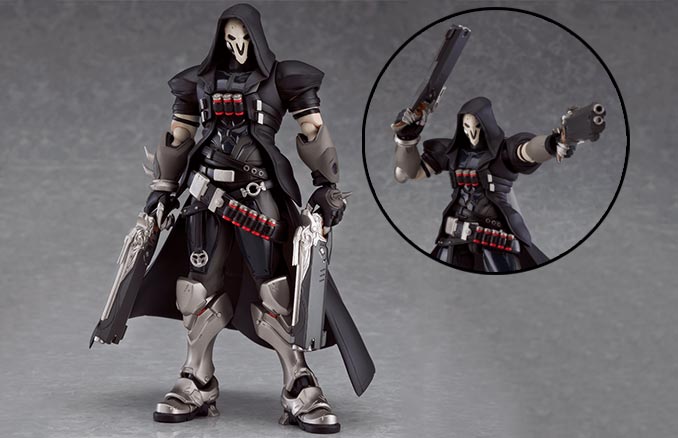 With the amazing detail and lifelike accuracy of this Overwatch Reaper Figma Action Figure, you might assume it was a statue instead of an action figure. That’s the beauty of figma; they offer faithful renditions of characters that are easily adjusted into a wide range of poses. It’s what they call “Beauty” and “Articulation.”

This is evident in the Reaper Figma, which somehow looks more real than in the game. It is highly detailed, and as you can see in the photo gallery below, it is easy to recreate all of his iconic poses. It comes with his twin Hellfire Shotguns, and even includes attachable effect to recreate Reaper’s Death Blossom ultimate. Plus it has an effect sheet to recreate his Shadow Step ability. Additionally there are 9 different hand parts for clenched fists, open hands, thumbs down, etc.

“Death walks among you.” From the globally popular multiplayer team based first person shooter Overwatch comes a figma of Reaper! The smooth yet posable figma joints allow you to act out a variety of different scenes. A flexible plastic is used in specific areas, allowing proportions to be kept without compromising posability.

Reaper’s twin Hellfire Shotguns are included to display him ready for battle. Effect parts can be attached to the hellfire shotguns to recreate his Death Blossom ultimate. A Shadow Step effect sheet is included which can be placed at his feet to pose him using the ability. There are 9x different hand parts including open hands, clenched hands and a thumbs down hand are all included. Also included is an articulated figma stand to facilitate various exciting poses.

The Overwatch Reaper Figma Action Figure stands about 6 1/2″ tall and comes packaged in a window box.

Pre-order the Overwatch Reaper Figma Action Figure for $80 at Entertainment Earth or Blizzard. It is expected to ship in March 2019.

Death walks among you in the form of the Overwatch Reaper 12-Inch Statue. Standing approximately a foot tall, this polystone statue features one of the most lethal members of the Overwatch and Blackwatch teams. Wearing fear-inducing armor, and having neat tricks like the power to […]

The doctor is busy but the Silent Hill 2 Bubble Head Nurse Figma Figure can see you now. If you’re feeling healthy now, she guarantees you won’t by the time she’s done with you. With hi-tech medical instruments like a knife and metal pipe in […]