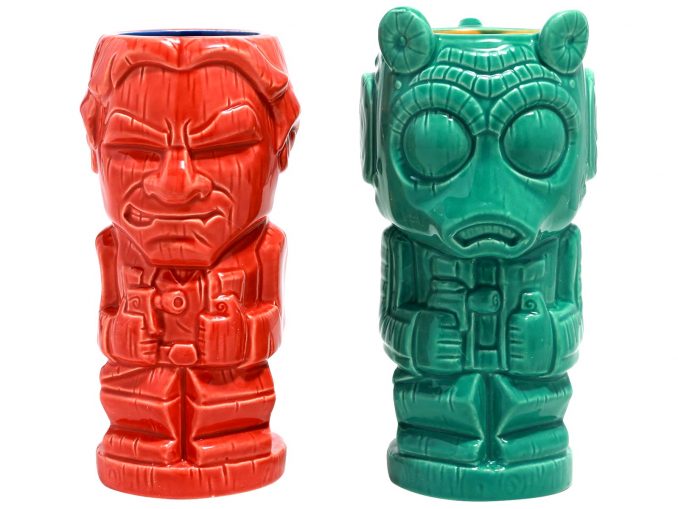 Who shot first? At this point, does it really matter, when you can lift a glass together with the Star Wars Han Solo vs. Greedo Geeki Tikis Set. This stylized set of tiki mugs features the likeness of Han Solo and Greedo.

Made of ceramic, these drinking mugs are dishwasher and microwave safe. Han Solo has a capacity of about 19 ounces, while Greedo clocks in at 21 ounces.

Capture a Star Wars moment! Featuring the elite smuggler and pilot of the Millennium Falcon, Han Solo, as well as a deadly bounty hunter commissioned by Jabba the Hut, Greedo, these Geeki Tikis® mugs represent their fateful Mos Eisley encounter! Sip on these as you ponder the eternal question of, “Who shot first?

Purchase this Star Wars Han Solo vs. Greedo Geeki Tikis Mug Set for $39.92 at BoxLunch. (Sale price at the time of publication and subject to change.)

Are you ready to build a LEGO hive of scum and villainy? The LEGO Star Wars Mos Eisley Cantina Building Toy will let you do just that, by building Mos Eisley. Now you can recreate all of the cantina scenes and more from Star Wars […]

While all Geeki Tikis are fantastically stylized, Rick Sanchez’s hair makes this Geeki Tikis Rick and Morty Rick Tiki Tumbler exceptional. Like all Geeki Tikis, this one comes with a reusable straw and is a way to stay hydrated without the same boring drinkware as […]

These Mos Eisley Cantina T-Shirts are perfect for St. Patrick’s Day. First of all, they are green, so you won’t get pinched. (Did you know that the tradition of wearing green on St. Patricks Day dates back to the 17th century?) Second, they are for […]

You know the Mos Eisley Spaceport from Star Wars: A New Hope. Obi-Wan Kenobi warned Luke Skywalker that it was a dangerous place: “You will never find a more wretched hive of scum and villainy.” The Mos Eisley Cantina (also known as Chalmun’s Cantina) is […]