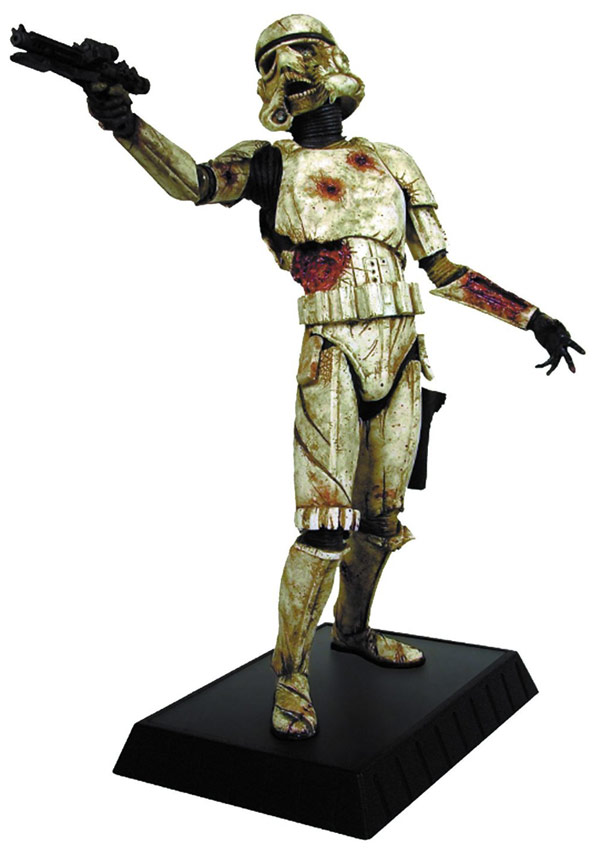 According to this Expanded Universe adventure, before they encountered Ben Kenobi and Luke Skywalker in Mos Eisley, Han Solo and Chewbacca had a nasty stay on a Star Destroyer where the Imperial forces didn’t stay dead when you killed them.

This 1:6 scale, 13-inch-tall statue depicts one of the many zombie stormtroopers that Han and Chewie, along with a few new characters, had to fight. Wearing damaged armor that includes an exposed mouth that’s perfect for spreading the zombie plague, each statue is individually numbered and comes with a matching certificate of authenticity.

Perfect for zombie lovers and Star Wars fans, the limited edition Star Wars Death Trooper Statue is available for $224.99 at Entertainment Earth and $149.93 at Amazon.com.

Do you know what happens when you mix two great things together? You get something awesome! Reese’s found this out when they combined chocolate with peanut butter and Jon Bolerjack figured this out when he combined Star Wars Stormtroopers with cool things like Spiderman’s evil […]

This Death Trooper Mini Dome Vegan Leather Bag sports a cool Death Trooper design with fluorescent green accents. Very intimidating! Your laptop won’t fit inside, but your netbook, tablet, or eReader will, along with a few other accessories. It has metal feet on the bottom […]