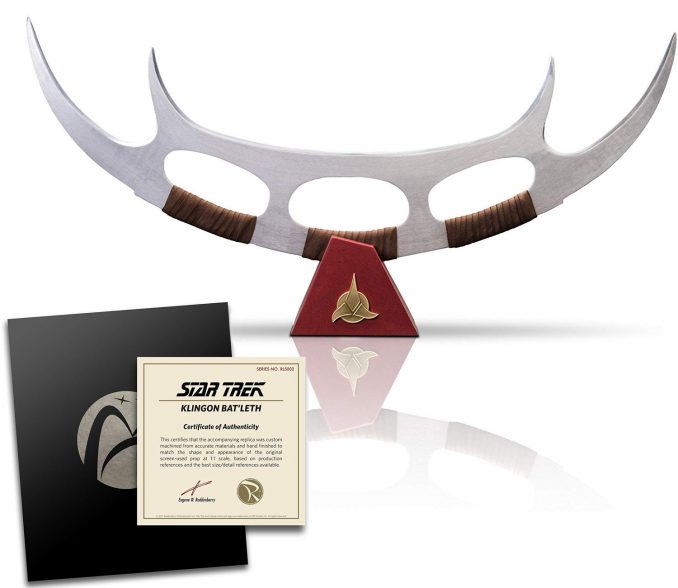 Display this Star Trek Klingon Bat’leth 1:1 Scale Prop Replica proudly and with honor. This Klingon weapon deserves a special place in your home.

This full scale, aircraft aluminum replica measures 43-inches long and is screen accurate. It includes a Klingon Warrior Floppet figure, certificate of authenticity, display stand and more. This 1:1 Scale Prop Replica looks exactly like the one on the show. It is designed to the specifications used for Star Trek: The Next Generation and Star Trek: Deep Space Nine.

This astonishing Star Trek Klingon Bat’leth Prop Replica is designed to the specifications used for Star Trek: The Next Generation and Star Trek: Deep Space Nine. Constructed of high-grade aircraft aluminum and featuring a genuine split-leather grip, the huge 1:1 scale replica measures 43-inches long x 16-inches wide x 1/4-inch thick and weighs an impressive 4 pounds. This is a truly substantial display piece! Included is a crimson 500-piece limited edition cold-cast resin display stand featuring a gold-plate aluminum Klingon insignia and a certificate of authenticity. The false edge blade is not sharpened, and the points have been dulled for increased safety when handling. Intended for adults only.

Klingon oral history holds that the first Bat’leth was forged around 625 A.D. by Kahless, who dropped a lock of his hair into the lava from the Kri’stak Volcano, and then plunged the fiery lock into the lake of Lursor and twisted it to form a blade. After forging the weapon, he used it to defeat the tyrant Molor, and in doing so united the Klingon Homeworld. This first Bat’leth was known as “The Sword of Kahless”. The name Bat’leth itself means “Sword of Honor” in Klingon. This sword represents all the majesty and tradition that is the Klingon Empire. The Bat’leth is a weapon that fills the hearts of those who oppose the Empire with fear.

Building upon a decades-long tradition of producing high-quality authentic merchandise for Star Trek fans around the world, Roddenberry Entertainment proudly presents the Roddenberry Legacy Series. This ongoing line of collectible prop replicas represents painstaking attention to detail and precision craftsmanship, inspired by original screen-filmed props. Roddenberry Entertainment is honored to be working with talented artisans, prop makers, and manufacturers to offer a variety of iconic pieces, each furthering the shared legacy of Star Trek.

It will impress your friends to see the weapon of a true warrior in your home. $349.99 from Entertainment Earth.

The weapons of Star Trek are as neat as the ships. If you are a fan of the Klingons, check out this Star Trek Klingon Beak Nose Disruptor Prop Replica. It is an accurate replica of the Klingon weapon of choice. This weapon has been […]

This Star Trek TNG Replica Foam Bat’leth will let you practice your Klingon fighting moves in a safe way. Because today is not a good day to die. It is an honorable weapon that is almost 4 feet across and weighs less than 2 pounds. […]

If you were able to get your hands on the Ghostbusters Proton Pack Replica, you’ll definitely want this Ghostbusters Ghost Trap Prop Replica to go with it. It is a painstakingly detailed life-size replica of the ghost trap from the movie and even comes with […]