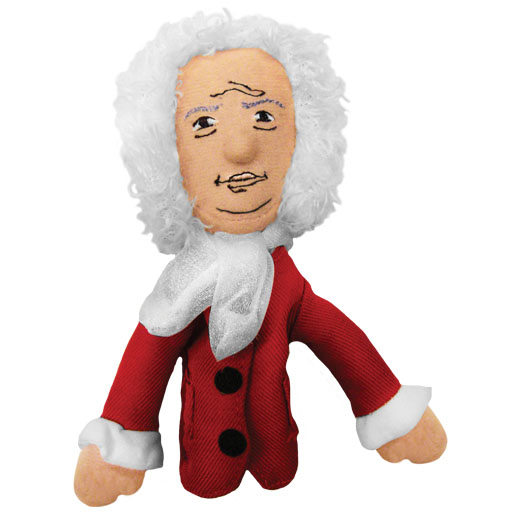 We owe so much to the early scientists who’ve paved the way for scientists today. How they figured things out with what little they had back then is unfathomable. Though we cannot personally tell guys like Galileo, Pasteur, Edison and Newton just how much we appreciate them and their work, we pay tribute to them by collecting their finger puppets. For instance, you could own the Sir Isaac Newton Finger Puppet Magnet and re-enact some epic scientific moments. The Newton puppet, an apple… you get the picture.

The Newton puppet sports that powder-white, curly-haired wig look that guys really dug back in the 1600’s, and the ruffled collar and dress coat. Newton’s facial expression seems to be a contemplative one as if he’s about to tell us about something astounding like his discovery of the laws of motion, or how he came up with calculus, or how planets orbit in an oval and not circular path.

NeatoShop carries the Sir Isaac Newton Finger Puppet Magnet for only $5.95, and they sell many other historically famous finger puppet friends as well.

If you’re looking to have a full-blown finger puppet show, you can add some zombies, narwhals, and landscape painter Bob Ross.

You really didn’t have to know diddly squat about art in order to enjoy watching Bob Ross paint beautiful landscapes on his show, The Joy of Painting. His smooth voice and happy demeanor had a way of making people sit through entire shows and marvel at the […]

If you’re not a morning person, then mornings are probably your least favorite time of day. I know they are, in my day. I just don’t get how some people can be so cheerful and chipper when it’s still so early out. However, I hate […]

Now you can experience the laws of conservation of mass and energy right on your fridge. This Newton’s Cradle Fridge Magnet will work great on your fridge, your locker, your filing cabinet and more. It’s fun to watch and educational too. Just watch the balls […]

If the Pickle Fingers tickled you silly, then the Narwhal Finger Puppets will surely be good for a poke or two. These 3-3/4″ soft rubber finger puppets have a contagious smile and a pointy horn, which makes for a handy food pick or a sharp […]

Everybody knows that knives are harmful to human flesh. I mean, just look at the hack job “Dexter” and his dark passenger do on a regular basis. The show perfectly illustrates what knives can do to people. Raffaele Iannello has captured that teeth-clenching, almost nauseous feeling we get from knives […]

Now you can be a little creative when things don’t go your way. Instead of hitting your monitor, grab the Finger Drums ($20) and do a little paradiddle. Turn the Finger Drums on and start tapping your finger. Every time you hit a drum head […]

If you are an Archer fan, then you are already familiar with Pam’s dolphin puppet. Now you can own this Pam’s Dolphin Puppet Plush and use it anytime you want to say something funny to your coworkers. This officially-licensed Archer merchandise will come in handy […]