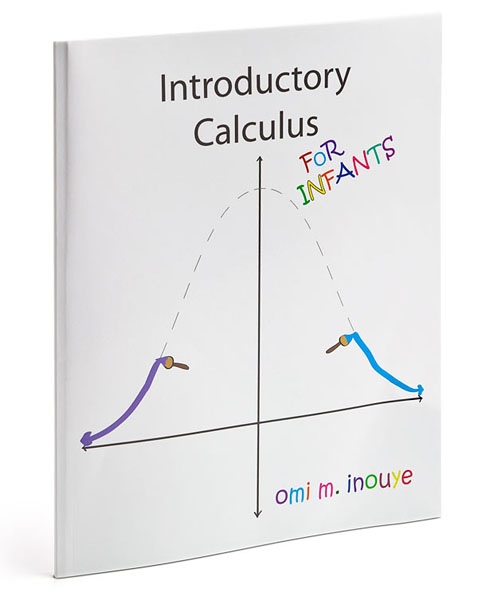 If you are old enough to read this, then you are old enough to have a story about how things used to be. Your granddad tells them, you dad tells them, and your older siblings do as well. They all start off and end with a tale of how hard they storyteller had it and that times have gotten so much easier. Well, we all know that isn’t true. Sure we have technology, but competition for jobs, college scholarships, and even positions on math teams has increased too many fold to count.

So maybe it turns out Tiger Mom’s aren’t that crazy after all. If you want your kid to be at the top of the class, you’re going to need to keep him/her/them on schedule and that means Introductory Calculus For Infants. You read me right people; even though you don’t know calculus, your infants better. Start teaching them the basics and don’t settle for any excuses. Turn those gugu gaga’s into gugu gaga’s + n.

You can purchase Introductory Calculus For Infants at Amazon.com from $10.95 and at ThinkGeek for $10.99 as soon as they restock.

This official Tomy/Takara i-SOBOT video shows the tiny talented humanoid robot doing flips, talking, and gives a brief overview of several of its features: In other i-SOBOT news the official i-SOBOT web site now has some of the Japanese web pages up; still waiting on […]

There’s this girl I knew back in high school who was, in my opinion, the best liar I’d ever met. She always had an excuse ready up her sleeve: why she was late for our meeting, why she failed to submit her part in the […]

As the Hobbit Schedule T-Shirt proves, Hobbits are in no danger of ever going hungry but I’m not sure how healthy this diet is for a group of people that are only about three feet tall. The Hobbits of Middle-Earth have to be a doctor’s […]

It’s a dish a lot of people love, but it’s something that probably many people dislike as well: chicken feet. I personally don’t get how some people could stuff foot after foot in their mouth, but after seeing these Crazy Bones Lollipops, I probably won’t […]

There are many cool LED Watches, such as the Sauron, Oberon, Lightmare, Pusher, and Kyokusen, to name but a few. They generally look really cool, but it can be hard to figure out the time quickly. Nu Pop Movement Crazy Hour Watches definitely look cool, […]

Do remember the Crazy Cat Lady? Maybe you have one living in your neighborhood? If so, remind her that licking yourself only counts as cleaning if you’re a feline and pass her a bar of this Crazy Cat Lady Cat Food Scented Soap. Stay alert; […]

Your kids can tap into the power of the animal kingdom when they strap on one of these cool-looking Crazy Stuff Kids Cycle Helmets and tear off down the road on their bikes, owning the pavement as only a wild animal can. It’s a crying […]