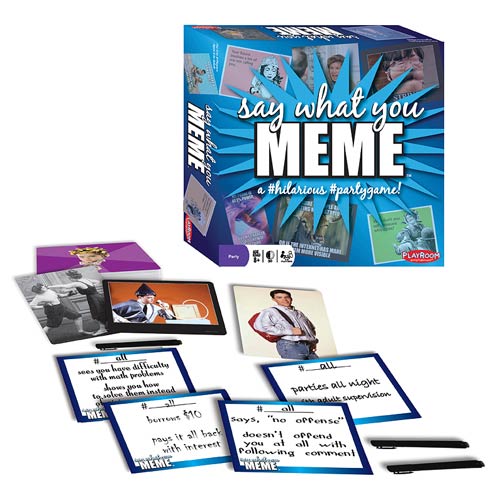 You’ve seen everyone else’s memes, even passed them around. Now make your own in the Say What You Meme Game. This hilarious party game lets you create your own memes and decide which one is the funniest.

Just like the popular Internet memes on social media sites, you can now join in on this pop-culture phenomenon. Be a real meme-Picasso. The idea is that players combine hilarious images with witty text. It is up to their opponents to decide who has the best.

Only $29.99 from Entertainment Earth. It is bound to be hours of fun.

Sure, we all wish that we could draw like Picasso and make faces look all distorted, but many of us lack that skill. Until now that is. The Mighty Morph Picasso Pad makes you feel like the master himself. This paper pad sculpture can be […]

The worlds of cubism and Marvel comics collide with this amazing Captain America Picasso Print by Mike Capp. It probably comes from an alternate universe where Picasso actually painted the superhero and sold the result for millions of dollars. Class up your wall while keeping […]

If you love this one meme among all others, you need to purchase this Keyboard Cat Animatronic Plush right now. It’s plush, it’s a cat playing the keyboard. It’s amazing is what it is. This meme comes to your home as an animatronic plush. Just […]

If you’re up for a crappy game, then I suggest you get the Doody Head Game. I don’t mean it in the figurative sense, but in the sort of literal way because there’s actual doody involved in the game, although not the real ones. So […]