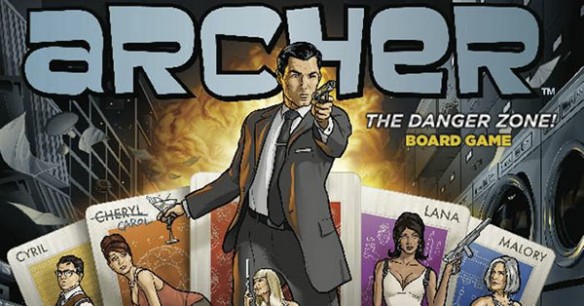 Due for release on Wednesday, (July 16, 2014), Archer: The Danger Zone! Board Game brings the hit FX TV show to life. Play as your favorite character (Archer, Lana, Cyril, Cheryl, Malory, Pam, Dr. Krieger, or Ray) as you hurl insults and play dirty tricks to win the game. The game is all about getting the better of the other players and ticking them off as much as possible as you build up your own ego. 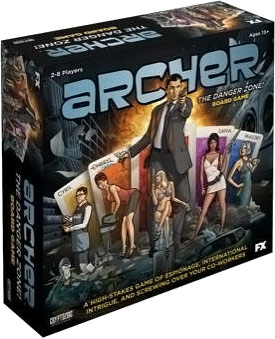 Naturally, most of the game action takes place at ISIS Headquarters, but there are spy missions that take the players off to exotic locations. Just don’t get too distracted by espionage and international intrigue, as you’ll need to belittle your coworkers to keep them from getting the Upper Hand.

Between 2 and 8 players can play the Archer board game at once, with a typical game lasting 30 to 45 minutes. It is recommended for ages 15 and up.

Archer: The Danger Zone! Board Game is a high-stakes game of espionage, international intrigue, and screwing over your co-workers. The object of the game is to gain the Upper Hand over your opponents by insulting them, doing well on missions (quite the ego boost), and encountering random guest stars and secondary characters from the show. Each player starts with 5 Upper Hand. The first player to get to 20 Upper Hand wins the game.

If the game is any where near as humorous as the show, playing will be a riot. Order the Archer Board Game for $31.99 at Amazon. Don’t delay–buy the first edition of the game to get 2 free promo event cards with the game.

How to Archer Book

The complete title of this book was a bit too long for the page title. It is How to Archer: The Ultimate Guide to Espionage and Style and Women and Also Cocktails Ever Written. If you’ve seen the animated comedy TV series Archer on FX, […]

Archer The Ultimate In Espionage Apron

Lana. Lana! Lana! Laaana! If you’re a fan of the animated TV show Archer, you’ll want to check out these Archer and Lana Cardboard Stand-Ups. Life-sized and made of cardboard, these standees are the next best thing to actually having Lana Kane (Aisha Tyler) and […]

Going to the beach? Well, go to the danger zone instead with this Archer Beach & Bath Towel. This towel features our favorite cartoon spy, Archer himself. Archer is all over this towel. Literally. He is large and in charge in front, with tons of […]

If you want to look like a super spy, but can’t afford a fancy new suit, check out this Archer Suit Costume T-Shirt. It is a long sleeve shirt that’s printed to look like the suit Sterling Archer often wears on the hit FX Network […]

Fans of the FX animated comedy series Archer, know what the character by the same name is all about and what he means when he says, “Just the Tip.” 100% cotton and ready for action, this Archer Just The Tip T-Shirt is a great way […]

Have a drink with your favorite international spy and playboy, Sterling Archer. This Archer Suit Flask has Archer’s suit printed on one side and on the other, it has the Archer logo. This awesome flask also has a screw-on top with hinge. This is one […]

Fans of Archer know that ISIS is the spy agency that Archer, Lana and the rest of team work for. So stop using operational funds and use your own cash. Show everyone that you are an Archer fan when you pull out your Archer ISIS […]