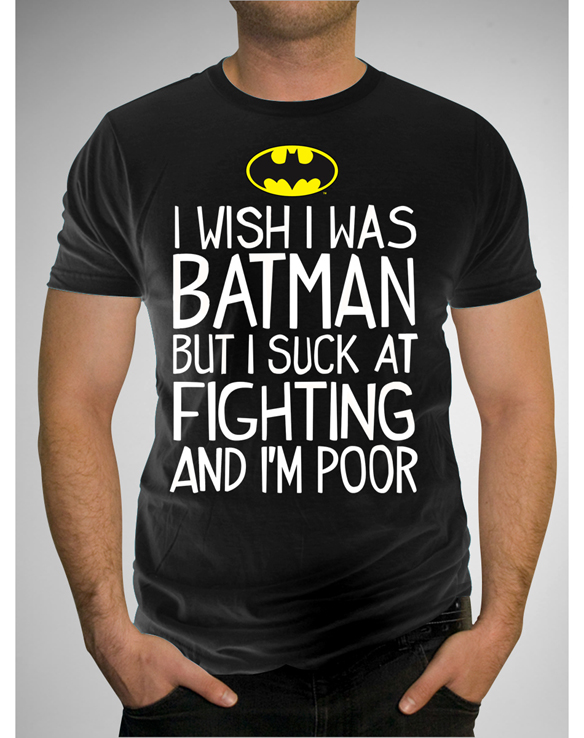 Honesty is the best policy with the I Wish I Was Batman but I Suck at Fighting T-Shirt, revealing Bruce Wayne’s true super powers… and showing why not everybody can be Batman.

A lot of people wish they were Batman, with some even going so far as to use twisted logic to explain how they might possibly be the Dark Knight, like with the Batman Logo No One Said T-Shirt. However, this officially-licensed, black, cotton t-shirt puts a different spin on things.

Instead of playing coy, this tee point-blank explains that you wish you were Batman… but you don’t know how to fight and you’re poor. Let’s face it. Super dedication to his mission and a super bank account is what allows Bruce Wayne to do what he does. Without those things, he’s just like… well… us.

The I Wish I Was Batman but I Suck at Fighting T-Shirt is available for $21.99 at SpencersOnline.

I believe just about everyone has heard of the “Fighting Irish,” and if you haven’t then you probably aren’t celebrating St. Patrick’s Day anyway. The Star Wars Fighting Empire T-Shirt was designed by Jimiyo and places our favorite Star Wars bad guys (Boba Fett, Darth […]

Fans of Nintendo’s plumber are going to love the Super Mario Mini Blank Books Set of 3. You get two 5-inch by 7-inch notebooks and a pocket notebook. One has lined paper, another blank pages, and the third has graph paper. You could create your […]

Nathan Fillion managed to become king of the geeks by basically being himself, making the I Wish This Was Nathan Fillion T-Shirt an obvious wardrobe choice for just about everyone because everybody wants to hang out with the man. Nate (I call him Nate because […]

Need some tough bookends that will guard your books and fight for their safety? These Fighting Stickmen Bookends are just what you need. These bookends aren’t afraid to fight for your literature. They are made out of steel to keep your books from tipping over. […]

Let the ultimate battle between thumbs begin with the Omnibot Battroborg Fighting Robots Thumb War, and find out who has the mightiest thumb of all. You probably don’t want to send your thumb into battle without proper preparation so suit up with either a red […]

If you’re like most of us, you probably can’t function in the morning without having several cups of coffee first. Sure the Darth Vader Dark Side Coffee sounds intimidating enough, he is a Sith Lord after all; but what about drinking something with words death […]