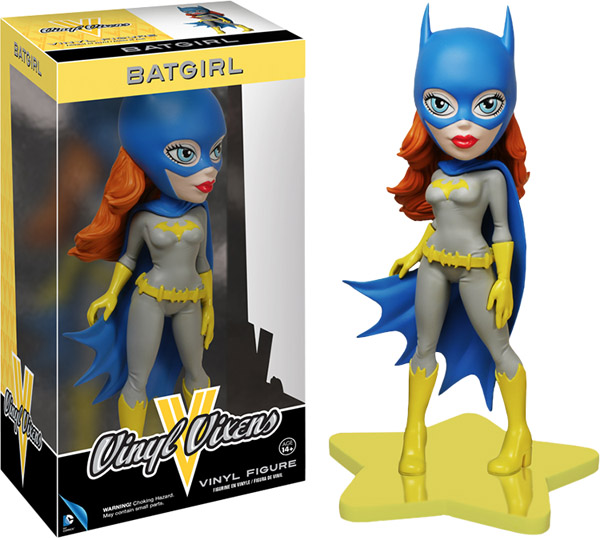 The Batman Batgirl Vinyl Vixens Figure is ready to take on the bad guys, and she plans to look good while doing it.

Standing approximately 9-inches-tall and dressed in her classic blue, grey, and yellow suit, Barbara Gordon’s vigilante alter-ego defends Gotham City from the forces of evil, such as the Catwoman, Harley Quinn, and Poison Ivy Vinyl Vixens.

The Batman Batgirl Vinyl Vixens Figure will be available September 2015 but it can be pre-ordered now for $29.99 at Entertainment Earth.

The Wonder Woman Metallic Vinyl Vixens Figure has the princess of Themyscira showing love for metal but don’t worry. She’s not ready to give up crime-fighting to start a rock band just yet. Standing 9-inches tall upon a glittered star base, this Wonder Woman figure […]

The Dark Knight will have his hands full with keeping Gotham safe because the Batman Vinyl Vixens Figures bring Catwoman, Poison Ivy, and Harley Quinn together for the ultimate crime spree. Funko, the brains behind the incredibly popular Pop! Vinyl figures, has created the Vinyl […]

Looking mischievous and ready for action, this Suicide Squad Harley Quinn Vinyl Vixens Figure is ready for your collection. Hopefully she won’t cause too much chaos! She stands on a special display base, with her bat that says “Good Night,” and is about 9-inches tall. […]