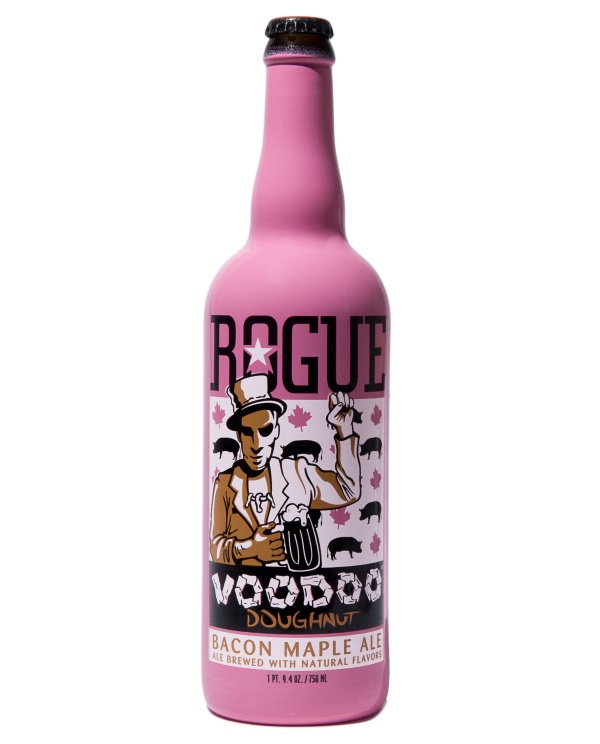 Care to take a swig or two of a drink that’s got a little bit of everything? If you’re the adventurous type and can stomach concoctions no matter how weird they may be, then you might want to get a bottle of the Rogue Voodoo Doughnut Bacon Maple Ale. It’s a really long name for a brew, but rightly so, because you’ll know what’s already in it from the name alone.

The Rogue Voodoo Doughnut Bacon Maple Ale is a mix of pretty common flavors that you probably never imagined being mixed together in a drink, like bacon and maple syrup. The brew comes in an attractive pink bottle that’s just waiting for you to pop the cap off.

Who knows? You might actually like it and decide to take some of it with you in your Notebook Flask or Rx Label Flask.

Rogue Ales has collided with Voodoo Doughnut to create Bacon Maple Ale! This unique creation contains a baker’s dozen number of ingredients including bacon and maple syrup from one of Voodoo’s signature doughnuts.

Each bottle of the Rogue Voodoo Doughnut Bacon Maple Ale costs $13 and is available from Rogue.

When we think of voodoo dolls, typical things that come to mind are human-shaped dolls getting stabbed with sharp objects. The Voodoo Lollipop is a voodoo prop that doesn’t require pins and needles. It’s easier to use; all you need is your mouth. We also tend to […]

That’s right, bottled bacon. And why not, GeekAlerts has shown you Canned Bacon already. So add a little bacon to your summer drinks and desserts with the Torani Bacon Syrup; perfect for the bacon lover or someone just looking to add a little salty, sweet […]

Bacon lovers will agree that there’s nothing quite like a plate of bacon to get your juices flowing. It can be for breakfast, lunch, dinner or even an in-between meal snack. With everything from Bacon Chocolate and Bacon Lollipops to Tactical Canned Bacon and Bacon […]

Every time I watch The Simpsons, I always end up craving for a doughnut after the episode ends. If you love doughnuts and think that giant versions of these baked goodies would be heavenly, then you might want to know more about a little something […]

Terry Pratchett created a mesmerizing, mind-blowing series of books when he wrote Discworld, and the Discworld Ales will put you in the right frame of mind to hang with bumbling (but very lucky) wizard Rincewind and the rest of the denizens of the platter-shaped world […]