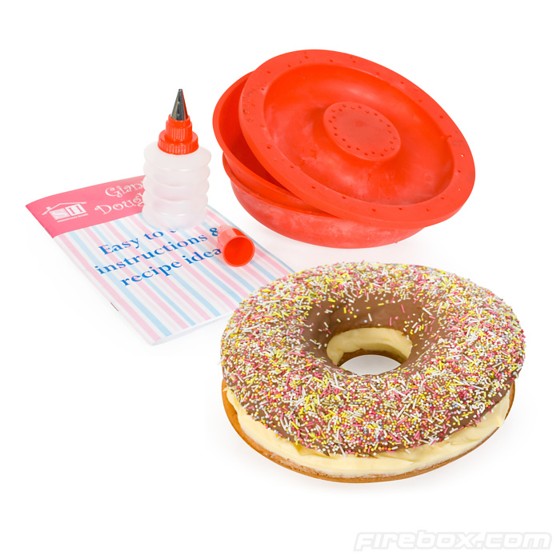 Every time I watch The Simpsons, I always end up craving for a doughnut after the episode ends. If you love doughnuts and think that giant versions of these baked goodies would be heavenly, then you might want to know more about a little something called the Giant Doughnut Mould.

If you’ve got a kitchen with basic ingredients to bake your own doughnuts, then start a-mixing because the Giant Doughnut Mould will help make your dreams for a giant doughnut into a reality. Lather on generous Bavarian cream or jam fillings and top your doughnuts with some frosting, sugar glaze, or sprinkles. The choice is yours and the possibilities are endless.

Enough to make a certain Mr. Simpson go weak at the yellow knees; the Giant Doughnut Mould lets you make massive cakey versions of your favorite between-meal snacks. Are you an original glaze, or a chocolate sprinkles kind of person? Or maybe you prefer them pumped full of custard, with a little sugar on top? However you take your doughnut, let your ideas run wild with this complete kit, including three silicone trays and a decoration bottle. We’re going to need a bigger coffee.

The Giant Doughnut Mould is available from Firebox for $16.

The Simpsons Doughnut Maker ($51) produces a batch of 6 perfect doughnuts in a few minutes. It’s easy to clean and some recipes are included. Just don’t eat too many of those treacherous doug rings. You don’t want to wake up one day, just to […]

There’s just something about huge versions of normal, every day things that makes these objects all the more appealing. Take for example the Giant Doughnut Mold, which you can use to make your own enormous donuts. Or the Big Time Wall Clock which looks like […]

With the release of Activision’s all-new Skylanders Giants video game, there are a ton of reasons to get pumped for the game’s arrival. Just when you’ve gone bankrupt trying to accumulate all the possible characters from Spyro’s Adventures, now you have to buy the new […]

If you’ve got the right mold, you can shape Jell-O into just about anything; red hearts, yellow moons, orange stars, green clovers, blue diamonds and purple…babies? That’s right. Now you can make a big Jell-O baby with the Giant Baby Jelly Mold.