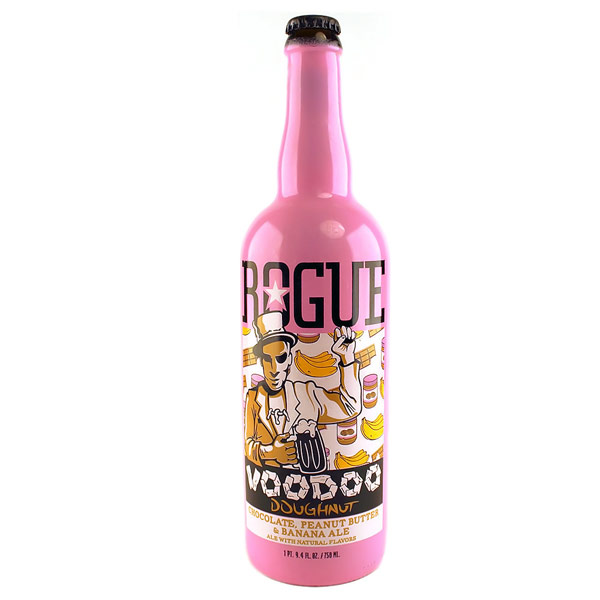 If you ever want to drink something really odd while honoring Elvis Presley at the same time, Rogue VooDoo Doughnut Chocolate, Banana & Peanut Butter Ale is the alcoholic beverage you’re craving… even if there’s no way you’ll be able to say that whole name after having a drink or two.

The King of Rock and Roll wasn’t just known for his music and swiveling his hips on stage in an inhuman way. He also gained fame (infamy?) for bringing the culinary treat of peanut butter and banana sandwiches into the spotlight.

Rogue Ale and Voodoo Doughnut (two of the most interesting names in beverage making) have teamed up to transform the King’s kitchen creation into an alcoholic beverage… after adding in chocolate, of course, because everything is better with chocolate.

Rogue currently has a policy of not selling to people in states that restrict the import of alcoholic beverages (because of all that pesky prison time involved) so people in Utah, Massachusetts, Texas and North Dakota will have to suffer, but everyone else can grab Rogue VooDoo Doughnut Chocolate, Banana & Peanut Butter Ale for $13 at Rogue.com.

When we think of voodoo dolls, typical things that come to mind are human-shaped dolls getting stabbed with sharp objects. The Voodoo Lollipop is a voodoo prop that doesn’t require pins and needles. It’s easier to use; all you need is your mouth. We also tend to […]

Do you and your bestie go together like PB&J? Maybe with a few slices of banana thrown in there to symbolize that your relationship is just that much over the top? Then you should honor your everlasting friendship by wearing the matching Peanut Butter, Banana and Strawberry Jelly BFF Rings. These […]

Every time I watch The Simpsons, I always end up craving for a doughnut after the episode ends. If you love doughnuts and think that giant versions of these baked goodies would be heavenly, then you might want to know more about a little something […]

We’ve seen Giant Gummy Bears, Huge Chocolate Bars, and Big Lollipops, so it’s about time we had a humongous peanut butter cup. The Perfect Endings Peanut Butter Cup Cake is such a treat, and it’s here for our enjoyment. This giant peanut butter cup features […]

Do you love a little pain with your peanut butter? If so, the Instant Regret Peanut Butter has more than what it takes to have you crying ‘Uncle,’ as you transform an ordinary peanut butter and jelly sandwich into a vehicle of death and destruction. […]

Since today marks the end of the world for many of you, maybe you should get rid of that unlucky rabbits foot and go with the Zombie Blind Box Voodoo Dolls….At least you’ll look cool when the zombies eat you. Each 2.5 inch string voodoo […]

You don’t want to mess with voodoo. Well, you don’t want to be on the receiving end anyway. Whether it is a doll or in this case, a cutting board. The Ouch Voodoo Cutting Board will help you work out some aggression while preparing a […]

This set of 4 official Romulan Ale pint glasses is perfect for all of your blue drinks. Romulan Ale is banned in some sectors of the galaxy, but we won’t say a word to the authorities. We swear. Now you can drink in style, the […]