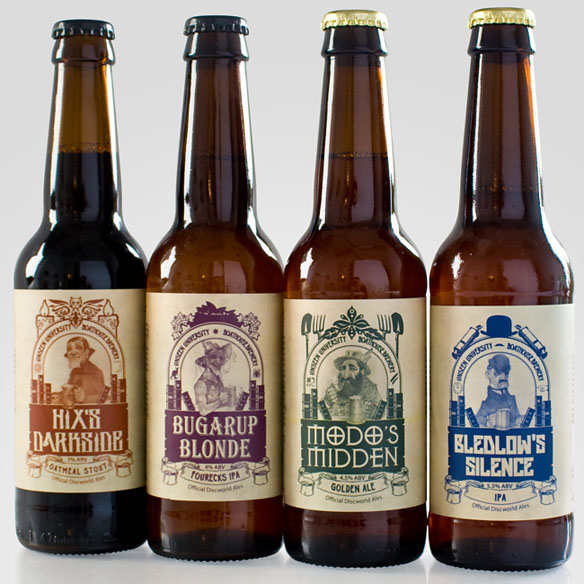 Terry Pratchett created a mesmerizing, mind-blowing series of books when he wrote Discworld, and the Discworld Ales will put you in the right frame of mind to hang with bumbling (but very lucky) wizard Rincewind and the rest of the denizens of the platter-shaped world that rests on the backs of elephants that stand on the back of a giant turtle.

Hey! If you ever find out that’s the same set-up that keeps our world from tumbling into the abyss, you’ll definitely need a few drinks so why not slake that thirst with a brew that was made in the Unseen University Boathouse Brewery. 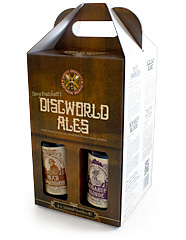 Okay, maybe that’s not exactly where it was made but we don’t know that for sure so the possibility is there, and you have to admire the cool presentation gift box, even if Cohen the Barbarian doesn’t personally endorse the product. He might if he could be found but he was last sighted near The Luggage, and you know how that usually goes.

Featuring a robust Oatmeal Stout, a couple of IPAs, and a refreshing Golden Ale, The Discworld Ales are the perfect drink of choice of fans of Terry Pratchett and his wild-and-wacky Discworld. They’re available for $32.19 at Firebox.com.

Sometimes it’s tough being a geek. Like when you play RPGs and other games that require a lot of dice and a lot of dice rolls. This handy +10 Electronic Dice Barbarian Gauntlet will make life easier for you, while making life geekier as well. […]

The Captain America French Terry Hoodie is a casual way to represent the Cap, without wearing the full costume. This full zip hoodie with ribbed cuffs and waist looks retro and cool. It has exposed seams and a distressed print on the chest and sleeves. […]

Forget about discovering the secret of steel because the Conan the Barbarian King 1:4 Scale Statue is all you need to please Crom. Measuring 21-inches tall (to the top of the spear) and 15-inches-wide, the barbarian-turned-king (who looks a lot like Arnold Schwarzenegger) sits upon […]

With the Kikkerland Digital Travel Luggage Scale, you can easily determine exactly how much your luggage weighs. These days this is more important than ever, because most airlines strictly enforce weight limits and charge exorbitant fees for overweight baggage. If your bag weighs 51 pounds […]

This Superman Brushed Terry Lounger with Foil Removable Cape is for the man who wants to lounge around, but still feel like a Man of Steel. It features a gold and red lame design plus pockets and a full-zip front. It even has a hood […]