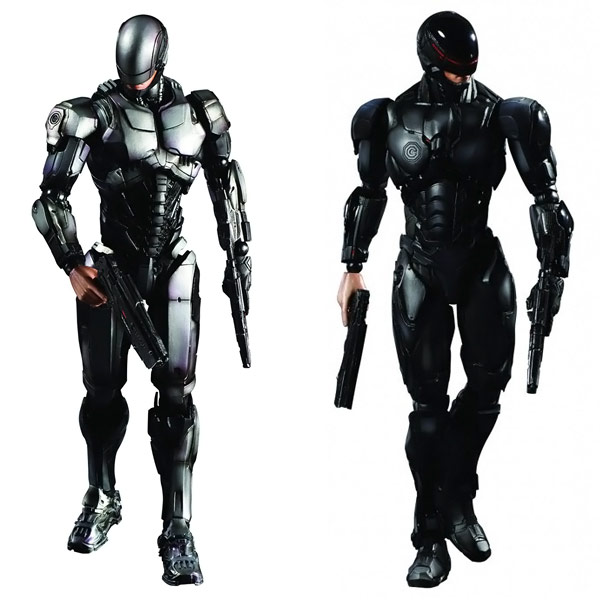 Dead or alive, the RoboCop Play Arts Kai Action Figures will be coming with you if you’re a fan of the 2014 film that will introduce Alex Murphy to a new generation of movie-goers.

To try and satisfy the fans of the classic 1987 movie that gave us our first look at the police cyborg, Robocop initially hits the streets as Robo 1.0, featuring the familiar silver and black design used in the original three films, although the design for the 2014 remake is sleeker and more modern-looking.

Of course, a remake would be a little boring if things weren’t changed up a bit so it’s decided that Murphy would look better in black, prompting the upgrade to Robocop 3.0.

Both versions of the man-machine stand 9 1/2-inches tall and include all the gear needed to clean the mean streets of the future, including a Taser, machine gun, and Beretta. Both figures also come with a display stand and interchangeable parts that let Robo be on display with his holster either open or closed.

This Robocop Vinyl Figure says “It’s your move punk”, which means that you need to purchase it and add it to your collection. Or Detroit’s finest will find you. This 4″ Tall vinyl figure is absolutely adorable. He will keep your collection crime-free. Cutest Robocop […]

Alex Murphy is part man, part machine… All cop! If you love the classic Robocop movies, you’ll want to get your hands on this Robocop Action Figure With Spring Loaded Holster. I’d buy that for a dollar! Will you buy it or won’t you? Your […]

A sharp-eyed cop sees the man behind the machine on the Robocop ‘Murphy It’s You’ T-Shirt. Officer Alex Murphy was a good cop trying to do the right thing when he caught a bullet between the eyes. With a little hi-tech help, he was soon […]

The future of law enforcement now has a remote controlled action figure. This Robocop 3 Remote Controlled Deluxe Action Figure will be the crown jewel in your Robocop collection. This is the most detailed action figure of RoboCop available and it even includes several accessories […]