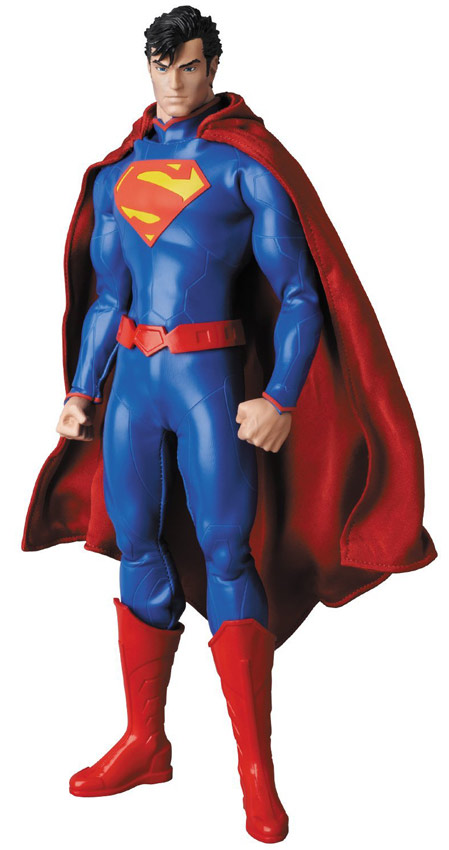 The iconic ‘S’ curl and red underwear are gone on the Real Action Heroes RAH DC New 52 Superman but he’s still the Man of Steel.

Standing approximately 12-inches-tall, this action figure offers the new look for the last son of Krypton. With the New 52 do-over, Supes lost his iconic hairstyle, started wearing his undies on the inside of his costume, and hooked up with Wonder Woman instead of Lois Lane. He – along with many other heroes – got some stylish piping on his costume, which, thankfully, isn’t as noticeable on the action figure as it is in the comic books. The New 52 is all about stylish piping on superhero costumes.

The figure has multiple points of articulation and the cape features a wire armature around the edges to allow for dynamic posing.

The Real Action Heroes RAH DC New 52 Superman will be available August 2015 but it can be pre-ordered now for $209.99 at BigBadToyStore.com. Also at Amazon.co.jp.

Ever wished you could soar through the air like Superman, pummel bad guys like Batman, or look as good as Batgirl or Wonder Woman while doing the hero thing? Personalized Superhero Action Figures let you live the dream. With a couple of photos and some […]

The baddest superhero with purple hair is ready to kick butt and take names with the Kick-Ass 2 Hit Girl Real Action Heroes Figure. Chloe Grace Moretz made the purple-clad, attitude-packing Hit Girl instantly popular in the Kick-Ass films, and you can now bring her […]