You remember the classic Rampage video game by Midway right? Three humans turned into gigantic monsters destroy the cityscape, eating people and destroying helicopters, tanks, taxis, police cars, etc., to advance to the next level. Well now it looks like someone thought that would be a good idea for a movie …so let the merchandising begin.

George, a King Kong-like gigantic gorilla, Lizzie, a Godzilla-like dinosaur/lizard, and Ralph, a giant werewolf, are all back in their original 8-bit form with the Rampage – George, Lizzie & Ralph 8-Bit Pop! Vinyl Figures. Where’s the 8-bit Rock to save the day?

If you were a fan of the original game then you’re going to want these Rampage figures for your Pop! collection. Don’t forget theses other cool 8-bit Pop! figures: NES 8-Bit Horror Funko POP! Vinyl Figures and Alien 8-Bit Pop! Vinyl Figure. 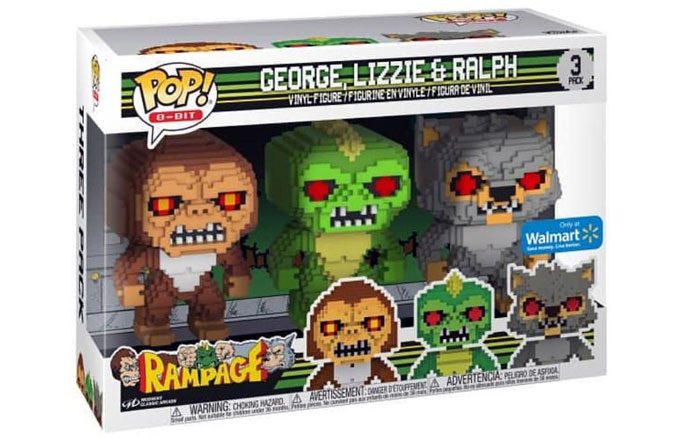 This Pop! 3-Pack features the game’s main characters in all their 8-Bit glory; George, a King Kong-like gigantic gorilla transformed by an experimental vitamin, Lizzie, a Godzilla-like dinosaur/lizard transformed by a radioactive lake, and Ralph, a giant werewolf, transformed by a food additive. As monsters, they need to raze all buildings in a high-rise city to advance to the next level, eating people and destroying helicopters, tanks, taxis, police cars, boats, and trolleys along the way.

If anyone can turn the Rampage video game into a good movie, The Rock can..so we’ll wait and see. Until then enjoy the Rampage – George, Lizzie & Ralph 8-Bit Pop! Vinyl Figures from Popcultcha.com and avalble in April at Walmart.com.

Nobody’s ever too old for plush toys. They come in all shapes, sizes, and colors. Aside from that, they now come in various forms, from plain plush toys to keychains to pillows. And now, they even come on shoes too, like the gorilla on these […]

Funko goes to the monkeys with the Kong: Skull Island King Kong 6-Inch Pop! Vinyl Figure. Kong is a fairly big ape, and that deserves a fairly big Pop! Vinyl figure. Unlike most of the Funko Pop! figures, which stand 3 3/4-inches tall, Kong stands […]

We’re well into flip-flops season now, but certain types of cold flooring can have your bare feet scrambling for the nearest oasis of carpet. If you want your feet to be cozy warm like the furry feet of a werewolf’s, then you need to slip on a pair of Werewolf […]