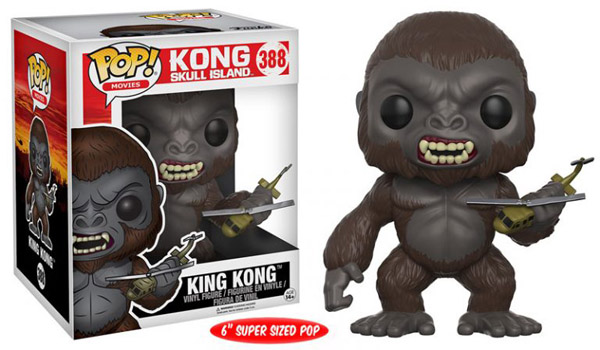 Kong is a fairly big ape, and that deserves a fairly big Pop! Vinyl figure. Unlike most of the Funko Pop! figures, which stand 3 3/4-inches tall, Kong stands approximately 6-inches tall, towering over everyone, including the poor pilot in the helicopter that he’s clutching like a toy in his left hand.

The Kong: Skull Island King Kong 6-Inch Pop! Vinyl Figure will be available February 2017 but it can be pre-ordered now for $14.99 at Entertainment Earth.

I’m a sucker for anything having to do with old school video games. That’s why I really love this Nintendo Donkey Kong Plush Mini Backpack. It will store your small stuff and you get to carry a plush Donkey Kong on your back. This backpack […]

If Donkey Kong is your thing, and you don’t need the 45 extra games that comes with with this other arcade gaming table, this might be just the ticket.

Fresh from the savage lands of Catnip Island comes the Kitty Kong T-Shirt. Kitty Kong, the 8th wonder of the world, wreaks havoc on this 100% cotton tee but the colossal kitten really just wants to play so just find a really big ball of […]

Build Your Own Easter Island Kit

GeekAlerts has shown you the Moai Ice Cube Tray and now we want to revisit the mysterious Easter Island Moai again.  The Build Your Own Easter Island Kit provides you with the opportunity to learn more about the strange large headed Moai.  What is their […]