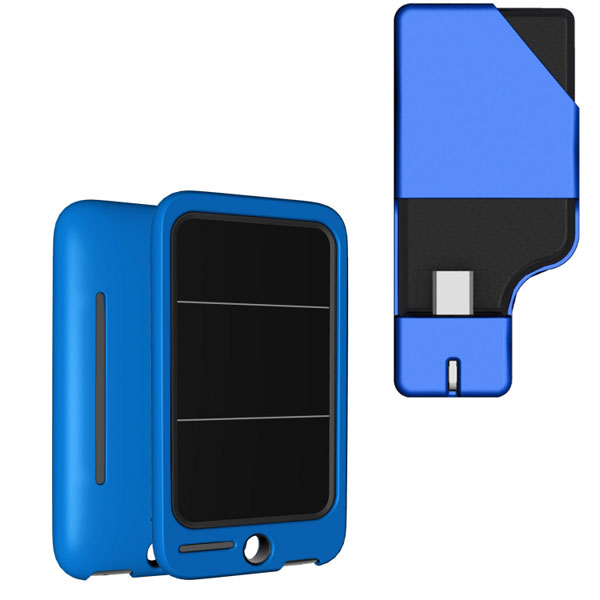 Today is turning out to be a very busy day at the CES 2012 show in Las Vegas. PowerSkin announced their new SolarCharge & KeyCharge Portable Power Solutions. Designed to boost battery life for users on the go, these portable power solutions are sure to be a hit in 2012.

The SolarCharge features 1000 mAh of power which can extend the talk time of smartphones as well as your iPod Touch by as much as 350 minutes. The KeyCharge has 750 mAH and will extend talking time up to 90 minutes with most smartphones. Both chargers feature a blue rubberized coating and LED lights to indicate the battery level.

PowerSkin wasn’t done there. They also displayed Gaming Skins for iOS and the Nintendo 3DS, as well as several new smartphone skins.

The new PowerSkin SolarCharge & KeyCharge Portable Power Solutions will be available in February 2012 from $24.99 at Power-skin.com and most likely Amazon.com.

PowerSkin has just announced that they will be expanding their product line beyond the Apple, Blackberry, and other smart devices, to also include things like the Nintendo 3DS. The PowerSkin Gaming Skin for Nintendo 3DS will not only protect the 3DS with its shock-absorbing case, […]

So you’ve got the new iPad, the iPhone 5 and a bunch of other electric gadgets; now you need to ensure that you can use them. The Battstation – Rugged Water-Resistant Power Bank was designed by iBattz to give users a portable and durable battery […]

This Pokémon 4000 mAh Power Bank will give you the power you need while out playing Pokemon Go. It will keep your smartphone charged so that you can be the best Pokemon trainer you can be. It comes with a USB charging cable and has […]

One thing I don’t like about traveling is when time comes that I have to charge my device. There’s the whole hassle with adapters and checking to make sure that you’re plugging in the chargers in the right sockets. There’s also the rare occasion where […]

We all have seen water resistant cases for our tablets and smartphones before, but this is CES 2012; so you know there has to be something special about these cases. The Benzitech’s New Waterproof Smartphone and Tablet Cases aren’t just waterproof, they can actually accompany […]