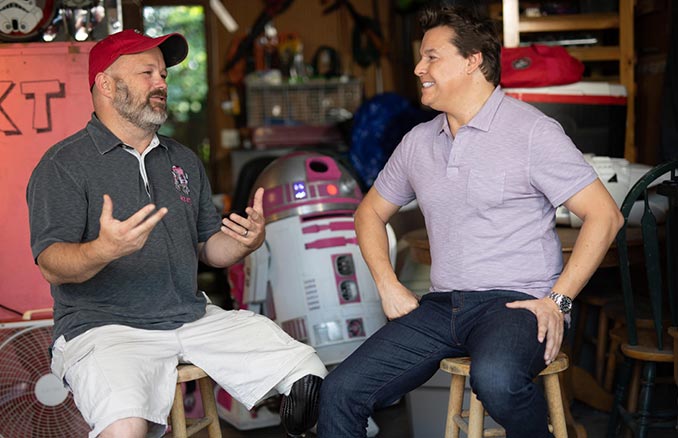 A new digital series from Lucasfilm starts tomorrow (October 2, 2018) featuring the remarkable stories of Star Wars fans from all walks of life. Preview it now, in the Our Star Wars Stories Trailer.

For Our Star Wars Stories, host Jordan Hembrough (Toy Hunter) travels across the United States talking to Star Wars fans about their unique journeys with the saga and its impact on their lives. Because Star Wars is such a cultural phenomenon that impacts people far beyond most other movies or brands, it results in interesting stories of inspiration and passion.

Mickey Capoferri, senior director of online content and programming at Lucasfilm and executive producer of Our Star Wars Stories describes it as “a celebration of the fans.” He goes on to say that “It’s a look at how Star Wars has inspired and excited people in different ways, and influenced them to do things that maybe they didn’t think they could do. … It has deeper meaning and creates a deeper inspiration than I think any other franchise does.”

Watch the Our Star Wars Stories Trailer from Lucasfilm:

It’s not a stretch to say that Star Wars is more than just a movie. It’s a cultural phenomenon. Parents and children, friends, and even strangers wearing Star Wars T-shirts can share Star Wars’ timeless story of hope together. But for some fans, that message has a lasting impact long after they leave the theater.

Jordan Hembrough (Toy Hunter), has teamed up with Lucasfilm to shine on a spotlight these fans in Our Star Wars Stories, a digital series premiering tomorrow (October 2, 2018) at 9 a.m. PT/ET on the official Star Wars YouTube, Twitter, and Facebook channels, as well as StarWars.com.

Ghost Stories of an Antiquary, Vol. 1

If you want to protect your iPhone 5 but you don’t want to cover all that glorious tech with a bulky case, you can wrap it in love… and the D3O Impact Band for iPhone 5. The power of love might not offer much protection […]

Doctor Who ‘We Are All Stories In The End’ Wall Carving

Hit your fellow Whovians right in the feels with the Doctor Who ‘We Are All Stories In The End’ Wall Carving. One of the most dramatic moments of Doctor Who is captured on wood with true Whovian style. Approximately 30″ x 17″, this black walnut […]

Poe Stories and Poems is a modern graphic interpretation of his gothic classics. It includes seven of Poe’s stories along with powerful illustrations. Get yours while you can or wait nevermore. This is 120 pages of macabre for fans of Edgar Allan Poe. Inside you […]

There are more Time Lords than you can shake a sonic screwdriver at in the Doctor Who: 12 Doctors, 12 Stories Slipcase Edition, featuring the twelve main incarnations of everybody’s favorite madman with a box. The poor War Doctor gets left out yet again but […]

Watch the Hunter Killer (2018 Movie) Trailer for a film that is filled to the brim with fierce action and intense thrills. It’s a story about an American submarine captain and his crew, along with an elite team of U.S. Navy Seals, that must rescue […]